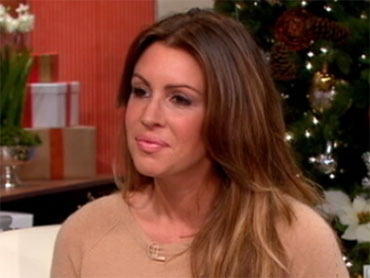 Rachel Uchitel became a tabloid sensation a year ago as a result of her involvement with Tiger Woods. In her own words, she was "famous for being infamous."

Now, her focus has turned to her addictions, which are chronicled in the VH1 series, "Dr. Drew's Celebrity Rehab."

In expectation of the show, Uchitel appeared on "The Early Show" Tuesday to talk about her experience in treatment.

Uchitel, "Early Show" co-anchor Erica Hill pointed out, could not discuss Tiger Woods because of a confidentiality agreement.

However, Hill said, because of the Tiger Woods events last year, Uchitel says she is viewed in public as a villain, which forced her into seclusion.

Hill asked Uchitel, "Why, then, put yourself out there again? Why come forward again and be in the spotlight?"

Uchitel responded, "Well, you know, I decided that I was not OK with the media creating this cartoon character of who I was. And I had been offered 'Celebrity Apprentice,' and then I was offered 'Celebrity Rehab,' and at first, there was no way that I wanted to do 'Celebrity Rehab.' I didn't consider myself an addict. I didn't consider myself an actress. I didn't consider myself a celebrity. And I just had no interest in doing a show like that. And then, after doing a lot of soul searching, I knew that I needed help. I didn't know what I needed help for. But I knew that Dr. Drew could help me and I figured the only way to have people be able to look into who I was, and hear things from me, was by doing the show. And if people want to judge me based on who I am when I've put myself out there, then I'm totally OK with that. But I wasn't OK with the media creating somebody for everybody to dislike."

Uchitel was treated for addiction to prescription drugs and love, Hill said, which Uchitel was dismissive of - at first.

Uchitel said, "I was totally against it at first. I was like, love addiction? What is that? That sounds ridiculous. But, you know, I always considered addictions something with a substance - cocaine, meth, heroin. And you know, I finally came to terms when I was spending time in rehab, and with Dr. Drew, to understand that I had a problem. I realized what that label was. And that there was a solution to it. And I realized that that is called love addiction. And what that means for me is I mistake intensity for intimacy. And I missed all the red flags that people have. And I sort of put a bag on somebody's head and create them into this knight in shining armor that's going to save me from this hole in my heart that really, I came to learn, was created after the loss of fiance in the World Trade Center. On top of the fact that I had lost my father years before. So losing two primary male figures in my life really affected me."

She explained, "I want to emphasize that this was by no means a reality show. It was rehab. There was nothing that was staged. It was really difficult to be there. ... Afterwards I went into a sober living environment where, again, I wasn't addicted to alcohol or anything like that, but I wanted to be involved in a place where people were really open and understanding of what was going on."

She added, "I have been given the opportunity now to look inside, and take a deeper look at what's going on with me and why I do things, why I make decisions, why I surround myself with certain people. And I've completely changed that. So I'm very aware of everything that I'm doing. And I really changed what makes me happy. And how I find happiness."

Uchitel said she's in "constant recovery" with the rehab staff from the show.

"I still see them on a weekly basis, and I'm in continual therapy," she said.

Hill asked, "Can you date while you're doing something like that?"

Uchitel responded, "Yeah, I can date. It's been, you know, I'm really trying to focus on normalcy in my life. You know, so I'm trying to figure out I can do to motivate me to get out of bed and be happy every day. So, you know, yes, I'm dating. But, it's, you know, on a much different level than it was before."