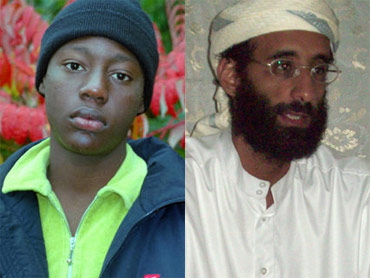 (CBS/Muhammad ud-Deen)
The father of the radical Muslim cleric who advised both the attempted Christmas day bomber and the man who killed 13 people in a shooting rampage at Ft. Hood says his son is "not Osama bin Laden" and not even a member of al Qaeda

The elder al Awlaki stressed that as a preacher, his son may have controversial views, but that he did not incite or encourage acts of terrorism.

The government of Yemen has said that Umar Farouk Abdulmutallab, accused of trying to blow up a Detroit-bound airliner on Christmas, met with al Awlaki in Yemen this year. Dr. al Awlaki says he does not believe such a meeting took place.

Al-Awlaki denied inciting the army psychiatrist to carry out last November's deadly shootings at Fort Hood, instead pointing the finger of blame at the United States, saying that American foreign policy created the conditions which ignited Hassan's rampage

Yemeni and U.S. officials believe al Awlaki is hiding out in the southern mountains of Yemen, possibly with al Qaeda members. The father said that his son is only hiding from missile attacks and doesn't even have safe water to drink. He said that he fears for his son's safety and would try to encourage him to turn himself in.

Al Awlaki was born in the United States. He earned degrees in engineering at Colorado State and in education leadership at San Diego State, according to his Web site. He served as an imam in Northern Virginia and worked at a mosque in San Diego before moving to Yemen in 2002.

U.S. counterterrorism officials have closely watched him after finding evidence of contacts he had with three of the Sept. 11 hijackers.

"He has been wrongly accused, it's unbelievable," the elder al Awlaki told CNN. "He lived his life in America, he's an all-American boy. My son would love to go back to America, he used to have a good life in America."