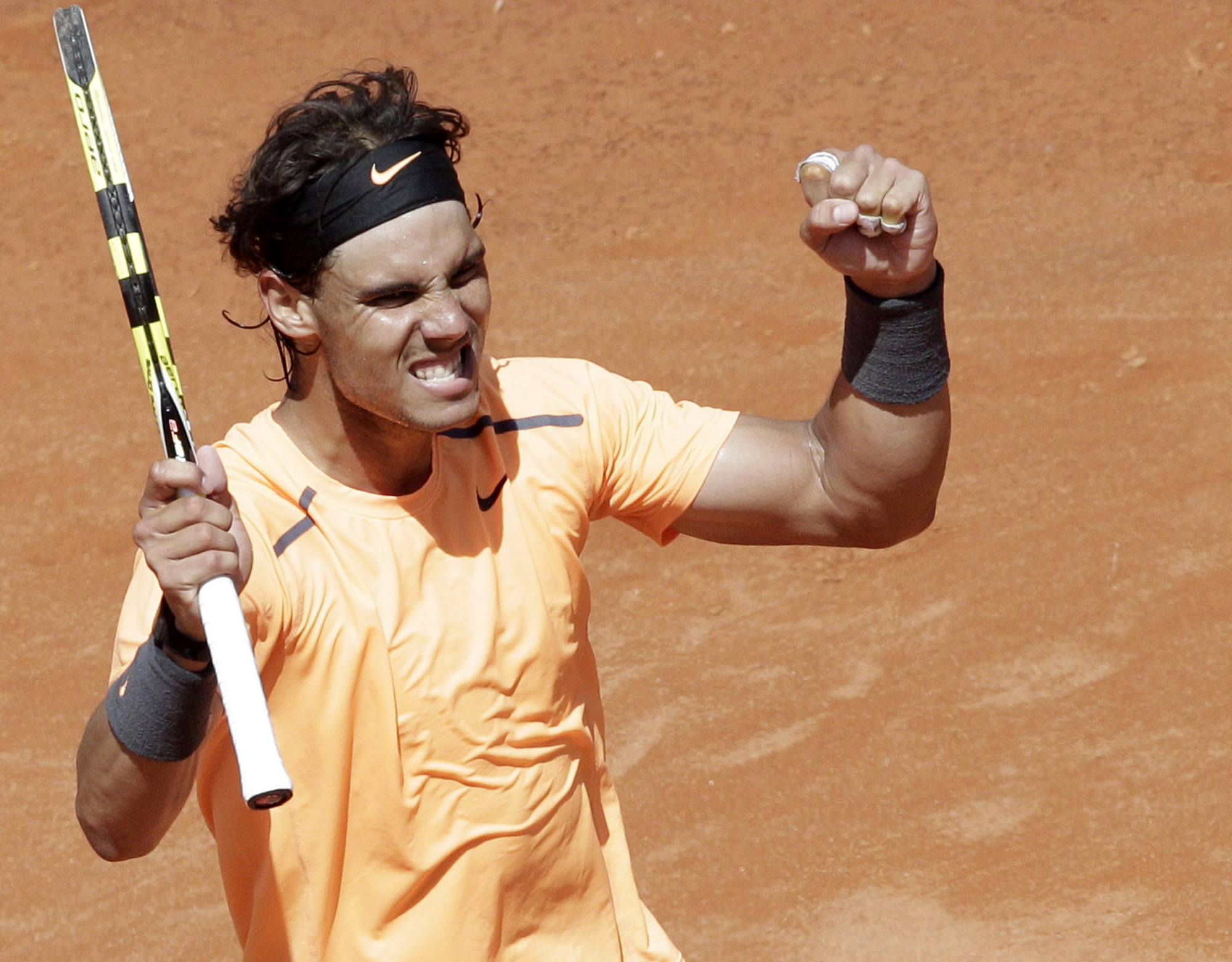 (AP) ROME - Rafael Nadal showed he's still the man to beat on clay, defeating Novak Djokovic 7-5, 6-3 Monday in a rain-delayed final to win his record sixth Italian Open and regain the No. 2 ranking.

After losing to Djokovic in seven straight finals — including Rome last year — Nadal has now won two straight against the top-ranked Serb after also capturing the Monte Carlo Masters on clay. Nadal also moved ahead of Roger Federer in the rankings with the French Open starting Sunday.

"I don't think I played that well. I can do better," Nadal said. "When you are not serving 100 percent perfect then you are in trouble because he returns hard. I am trying to play more aggressive and I am hitting the ball better than last year."

Djokovic, drained in Monte Carlo after the death of his grandfather, made 41 unforced errors in this match. His double-fault on the last point gave Nadal his 49th career title and his 35th on clay.

Nadal did not drop a set all tournament to clinch his third Italian Open victory in four years, with his winning streak interrupted last year by Djokovic. Monday's match was the first time the same players competed in back-to-back finals since the tournament began in 1930.

"He is always the favorite even if I win against him seven times," Djokovic said. "He is the best player in the world on this surface and the two wins I had gave me confidence and I think that the match today was quite close even if he won in straight sets.

Djokovic played well at the start but the turning point came midway through the 10th game when a line judge called the Serbian's shot out. The umpire overruled the decision, but Nadal won the replayed point and then held his serve to make it 5-5.

Nadal acknowledged last year that Djokovic had a mental advantage over him after all those losses.

"You need to accept your losses because this is a game and in this sport you will always lose, but it is normal that you lose and you need to be patient to wait for your moment," Nadal said. "I accept my losses and try to keep being competitive. You win a few points and you lose a few and you can lose a match. Today I won and that's the difference. You don't need to find great things — it is the small things that make the difference."

Nadal is a six-time champion at Roland Garros; Djokovic will be looking for his first title there. He holds the other three Grand Slam titles, having beaten Nadal in the finals of Wimbledon, the U.S. Open and Australian Open.

"I cannot say that thought is not present. It's there," Djokovic said. "I am going and preparing for a Grand Slam as I prepare for any other big event, with more focus. It's two weeks long and the most important tournament and we always want to deliver out best game. I feel good on the court and I need to make a few adjustments before Paris, but I'll be in top form."

Nadal broke first, in the fifth game of the first set, but Djokovic broke back when the Spaniard netted a forehand. Djokovic appeared in good shape, holding to love. Nadal, meanwhile, was struggling with his first serve.

Then came a long rally that ended with the overturned line call. Had Djokovic won the point, it would have given him two break points. But Nadal held and broke in the next game, drawing Djokovic to the net before sending a sharp volley past him. Djokovic was so angered he smashed his racket against a net post and drew a warning.

Nadal took the first set with the second of three set points after Djokovic hit long. And the Serb was immediately broken again in the second set as Nadal took control.