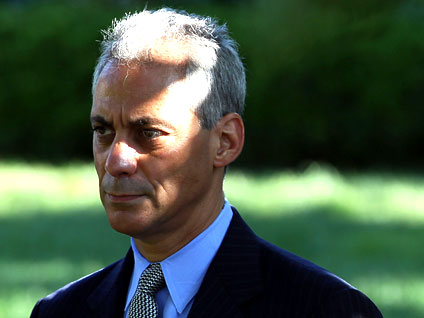 Among the candidates facing off against former White House Chief of Staff Rahm Emanuel in the Chicago mayor's race is a man who has lived under Emanuel's own roof.

Emanuel, who resigned from the Obama administration in October, has faced challenges to his candidacy based on residency requirements, as local law states that candidates must live in Chicago for at least a year prior to running.

It has been argued that Emanuel, having spent most of the past two years working in the White House in Washington, does not meet these requirements. According to the Associated Press, his residency could be challenged in court as soon as this week.

The tenant who had been living in Emanuel's house while Emanuel worked in Washington refused to leave upon the candidate's return to Chicago. What's more, Rob Halpin has decided to challenge his landlord in the upcoming race.

In an interview with a local television station, Halpin cast himself as an outsider and said the run has nothing to do with Emanuel, or of the time he spent living in his home.

Halpin joins the race as one of twenty current candidates, including the former Senator of Illinois Carol Mosley Braun and Rep. Danny Davis. The deadline to file was Monday, and voters go to the polls on February 22. Davis has said he does not believe Emanuel is qualified to run.

Another potential candidate, according to CNN, is none other than Sen. Roland Burris, who leaves his job in Washington at the start of 2011.

Burris, the only African-American currently in the Senate, served just two years on Capitol Hill after being appointed by disgraced Gov. Rod Blagojevich to fill Mr. Obama's vacant seat.

Although he was eventually sworn into office, controversy swarmed around Burris' appointment, and Blagojevich was removed from office just two weeks later. Blagojevich was charged with trying to sell or trade Obama's seat in the Senate, among other allegations.

A group of Burris supporters filed the necessary nomination paperwork this week. According to an aide, Burris "hasn't made any decision yet" to officially run for the opening.

The winner of the election will take over for retiring Mayor Richard Daley, who has served for more than twenty years. Last week, Daley defended Emanuel over his residency issues, citing the Obamas as examples.

"President Obama and Michelle live in Washington, D.C., as you know, but they're residents of Chicago," he said Saturday. "It is something that has been going on legally forever. So, there is no question."