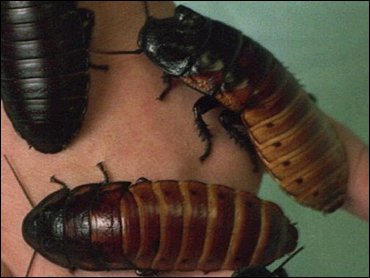 The Thai government is cautioning people against a new fad sweeping Bangkok — raising giant African cockroaches as pets — saying the bugs could become a health risk if let loose.

"We shouldn't be raising them as pets especially because they can thrive on anything, all kinds of foods," Public Health Minister Sudarat Keyuraphan said in a statement dated Monday.

The matter became a concern after Thai newspapers reported last week that some enterprising businessmen have brought the Madagascar Hissing Cockroach from Africa and are selling them as pets for 50 baht ($1.20) apiece at Bangkok's Chatuchak market, a sprawling warren of stalls that sell everything from antiques to military uniforms to toys.

The insect is so named because of the noise it makes during mating rituals. It is not known how and when the first imports were brought from Madagascar to Thailand.

Sudarat told reporters Tuesday that the law does not forbid the sale of cockroaches, but she is requesting vendors to stop selling them.

"We are very worried that if these cockroaches are released into public places, they will expand in numbers at a very fast speed, which could introduce many unknown diseases to the country," she said.

Cockroaches carry bacteria and viruses on their bodies, but it is not proven that they transmit disease. When feeding, the cockroaches walk, spit and defecate on the food. Some people are allergic to the droppings or remains of dead cockroaches.

A Public Health Ministry official said "a lot of people" have bought the cockroach in recent weeks. There are no figures on the number purchased or brought into the country, she said, speaking on condition of anonymity.

"Pet owners who want to discard them should call the Public Health Ministry or the department of livestock," Sudarat said.

The Madagascar Hissing Cockroach grows up to 2½ inches as compared to the 1.6-inch average length of the cockroaches found commonly in Thailand.

The world's largest roach, which lives in South America, is 6 inches long with a one-foot wingspan.