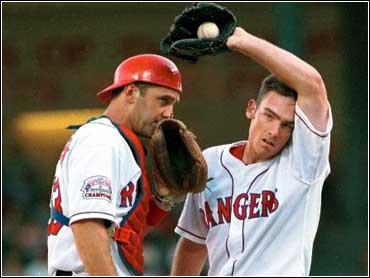 Instead of making his scheduled start in Triple-A on Wednesday night, Brian Sikorski beat the New York Yankees.

Sikorski pitched into the eighth inning of his major league debut, allowing just four hits and no runs, as the Texas Rangers snapped their 10-game losing streak to the Yankees with a 5-0 victory Wednesday night.

"Sometimes you wonder if it is ever going to happen. I was in the right spot at the right time, I guess, and it worked out for me," said Sikorski, who has played pro ball since 1995.

"It was something you dream about as a kid, and all of a sudden you find yourself out there on the mound."

While Texas was able to snap its losing streak to New York, Rangers' center fielder Gabe Kapler was unable to extend his 28-game hitting streak. He was 0-for-4, ending the longest hitting streak in the majors this season.

"Something like this, even if you are having a good time with it, it takes a toll on you," Kapler said. "I sat in my chair today before the game, and I was really tired, really mentally tired.

"But I'm not one of those guys to say I'm glad it's over because I would have liked it to go on."

Sikorski was pulled from the game after walking Derek Jeter to lead off the eighth. Mike Venafro finished the four-hit shutout.

Rusty Greer had a two-run triple and Rafael Palmeiro hit his first homer in 12 days fo Texas, which avoided being swept at home by the Yankees for the second time this season.

New York's 10-game winning streak over the Rangers had included the seven previous games this year and three in last year's playoffs. The Yankees have still won 39 of the last 51 games between the two teams.

Sikorski, who was 10-9 at Oklahoma and leads the Pacific Coast League with five complete games, struck out five and walked four in his 108-pitch effort.

"It was exciting, but you can't enjoy anything until it is over because you know what's sitting in the other dugout," Texas manager Johnny Oates said. "The kid kept on coming after then. To beat that club was a feather in Sikorski's hat. To shut them out, that was better than expected."

After Jeter led off the Yankees' third inning with a double, Sikorski retired 13 straight batters before walking Jorge Posada in the seventh. He then gave up a pinch-hit single to Jose Canseco, but both runners were left stranded when Luis Polonia flew out to center.

"Every time we looked in, he pitched out and vice versa," Yankees manager Joe Torre said. "He kept us on our heels. I give him credit for not losing his composure."

David Justice's sharp single to right and a double into the right-field corner by Tino Martinez started the Yankees' second. Sikorski then had two straight strikeouts, and after walking No. 9 hitter Jose Vizcaino to load the bases, got Polonia on a groundout.

"The second inning was huge for me. After getting out of that jam, everything seemed to get a little easier," said Sikorski.

Yankees starter Orlando Hernandez (8-10) lost his fourth straight start, and third since coming off the disabled list because of back spasms and a sore elbow. He allowed five runs and eight hits in seven innings.

"He was a lot better out there. He had command on his stuff better than he has," Torre said. "The score wasn't indicative of his performance."

Sikorski was starting in place of Ryan Glynn, who was placed on the 15-day disabled list after he suddenly passed out in the dugout during a game last Friday.

The Rangers had initially planned to use Jonathan Johnson in the series finale, but he was forced into early relief and went 4 1-3 innings for his longest career appearance as a reliever. Johnson went back to Triple-A and Sikorski came up for what will be moe than a one-game stint.

Oates said Sikorski will start again when Glynn's spot in the rotation comes up again Monday in a makeup game at New York.

Greer's two-run triple came in the fifth on a ball that Polonia misplayed in left. Polonia charged in on the fast-falling liner, but the ball short-hopped in front of him, glanced off his glove and rolled toward the wall as the Rangers went ahead 4-0.

Palmeiro's solo homer, a 391-foot shot to right in the fourth, was his 30th of the season. Luis Alicea added an RBI single. Frank Catalanotto had an RBI groundout in the seventh for Texas.