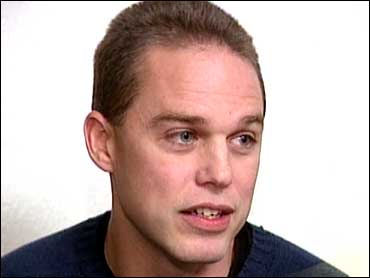 Nearly two decades after taking part in a brutal attack on a young woman in her Akron, Ohio, home, Lane Mikaloff has crossed paths with his victim in a way no one ever expected.

spoke with the victim
, Christine Robbins, for a two-part series on The Early Show and learned her remarkable story.

Now, Mikaloff tells his story, too.

The attack took place on a fall night in 1986, when Robbins awoke to find that two men had broken into her home. They ransacked the house, and took turns raping her.

The attackers tied her up and disappeared but with the details Robbins remembered, police had the clues they needed.

Lane Mikaloff, 18 at the time, and an accomplice were both convicted and sent to prison.

Long after the attack, Robbins endured terrible, lingering fear but, in time, she went on with her life. She married, had three sons, and did her best to put that horrible night behind her.

As for Lane Mikaloff, when he got out of prison in 2002, he vowed to stay out of trouble.

"People that know me know the progress that I've made in my life," he told Smith. "I made a decision to change after I done what I done."

Mikaloff started a family of his own on a quiet Akron street. Although he would always be labeled a sex offender, he thought an ugly chapter of his life was closed.

But there was a problem: just 592 feet from Mikaloff's front door is an elementary school. Smith reports that, under state law, no registered sex offender can live within 1,000 feet of a school. Two weeks before Christmas, Mikaloff and his family got an eviction notice.

"I can't even think of myself as being that person anymore," he said. "Especially now I look at my girls and … I think about if somebody else did something to them. And how would I feel about that?

"My victim, that's somebody's daughter. And I think along those lines now whereas before I didn't think like that."

The sheriff's office is not sympathetic.

"He's a sexual predator," says Christine Croce of the Summit County Sheriff's Office. "He's required to register every 90 days for the rest of his life, so, therefore, obviously the court thought his actions were pretty heinous and pretty serious."

But when Christine Robbins heard about what was happening to the man who raped her, she felt great sympathy.

"I'd feel bad for anyone in that situation," she told Smith. "Here's a man who's really doing all the right things."

Even more astounding, Robbins told Smith she is so far beyond that terrible phase of her life, she is now able to forgive Mikaloff for his crime.

"I feel no hatred toward him, none whatever. I wish him the best," she said.

With the help of a friend, Robbins started collecting money to help Mikaloff's family.

And so, two weeks ago, the man who raped Christine Robbins received her heartfelt forgiveness and $800.

"She restored my faith in a lot of things," Mikaloff told Smith. "I have her forgiveness. And that means more than this house."

Last week, Mikaloff's attorneys filed suit in federal court to overturn the law that would require him to move.