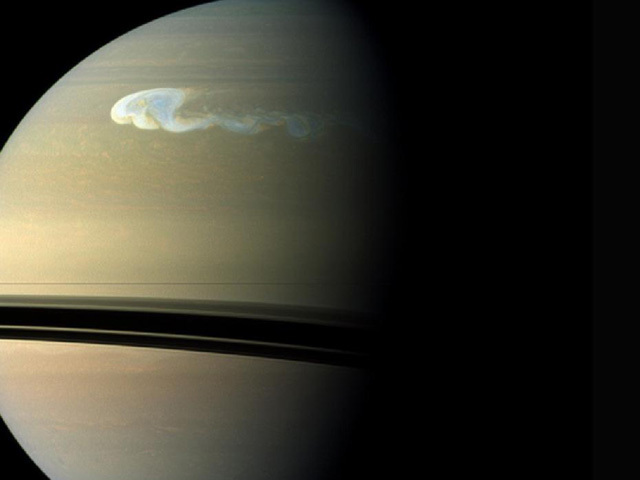 LOS ANGELES - It began as a bright white dot in Saturn's northern hemisphere. Within days, the dot grew larger and stormier.

The international Cassini spacecraft and ground telescopes have been tracking the turbulence since last December, visible from Earth as a type of storm known as a "Great White Spot."

Such planet-wide weather disturbances are rare on Saturn, where the atmosphere is typically hazy and calm. Since 1876, astronomers have observed only five other megastorms on Saturn.

NASA: The Cassini-Huygens mission
Gallery: A bird's eye wiew of Saturn and its neighbors

"This is a one-of-a-kind storm," said Andrew Ingersoll, a self-described planetary weatherman at the California Institute of Technology, who was part of the discovery team.

Scientists have long studied weather on other planets. One of the solar system's most famous landmarks is Jupiter's Great Red Spot, a hurricane-like storm that has been raging for centuries. Landers and rovers to Mars' surface often carried weather stations, dodged dust storms and sought favorable places to park during the winter.

An instrument aboard Cassini, which is orbiting Saturn, first picked up radio outbursts on Dec. 5, 2010 from a lightning storm. Around the same time, amateur astronomers peering through telescopes saw a bright point in Saturn's northern half. Further observations confirmed it was a brewing storm.

The storm system, which occurred during Saturn spring, grew in size and intensity, eventually stretching around the planet. At the height of the storm, Cassini detected 10 lightning strikes per second. Scientists said the electrical activity emitted by the bursts were 10,000 times stronger than lightning on Earth.

The findings were described in two papers published in Thursday's issue of the journal Nature.

The new work represents "some of the most detailed observations so far of such a dramatic event," Peter Read of the University of Oxford wrote in an accompanying editorial.

Saturn's violent weather differs from Earth and Jupiter in significant ways. Lightning storms on Earth tend to be localized and short-lived, lasting only a few hours. Jupiter storms can last for days and lightning is far more common there than on Saturn.

Since entering orbit around Saturn in 2004, Cassini has witnessed 10 storms in a region of the southern hemisphere known as "storm alley" because of the high level of storm activity.

The previous storms were much weaker compared with the latest one, the first to be detected in the northern hemisphere.