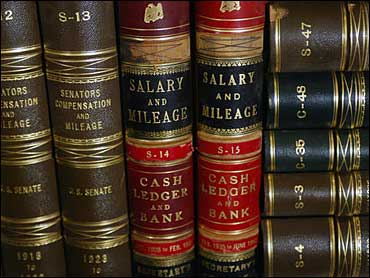 The handwriting is a fastidious cursive, the signatures include those of John Adams and Thomas Jefferson, the columns record an era when senators were paid the lofty wage of $6 a day.

Had Senate aides not stumbled upon the unassuming brown ledger last Tuesday, lying on a shelf in a basement storage room, workers clearing space for construction of a new visitors' center would have tossed it into the trash two days later.

The volume covers 1790 through 1881, and was surely considered mundane in its day. Its 400 neatly lined pages record senators' $6-a-day salaries and separate travel allowances of up to $6 a day, figured at 30 cents per mile for up to 20 miles a day, including food and lodging.

Viewed from the 21st century, the book is a window into a simpler time. So simple, in fact, that Adams, Jefferson, Aaron Burr, John C. Calhoun and other vice presidents signed it to authorize the Treasury to pay lawmakers' salaries and expenses.

"Between two covers, you see a raw slice of how the Senate operated as an institution ... during its first 90 years of existence," Richard Baker, the Senate historian, said after a news conference Monday where it was exhibited for cameras.

The ledger itself is about two inches thick, and its ink sepia with age.

The earliest entry is dated Jan. 19, 1790, and records the salaries and expenses of the 20 senators who made it to Philadelphia for the second session of the First Congress. The total came to $10,655.50.

Six dollars went a long way in those years, particularly at a time when being a senator was a part-time job.

In Philadelphia during the 1790s, a ship's captain earned $9 per month; a typical family of four would spend about $19 monthly for food, clothing and firewood; and $6 would purchase six gallons of rum, said Karie Diethorn, chief curator at the Independence National Historical Park there.

Baker said lawmakers averaged about $1,000 a year in pay — excluding travel expenses — over the first decades of the Senate's history. Today's senators are paid $150,000 a year plus some travel costs.

The document's existence was not a complete surprise because published congressional papers refer to such records being used by the office of Senate's financial clerk as late as the 1960s. Baker said officials believed in the 1980s that they had rescued all the records.

The book was probably rushed from the Capitol as the British were approaching the building to burn it in 1814, said Baker. It was re-bound in brown canvas in 1884, and somehow its cloth-based paper remains in excellent condition, despite its casual storage for so many years.

"This book is the ultimate survivor," he said.

The volume, which bore no title on its cover, was found last Tuesday when Clare Amoruso and Douglas Connolly, aides to the Senate Democratic Policy Committee, spied it on a shelf next to boxes of 1982 health care enrollment forms for Senate employees.

"I mean, we're holding something in our hands that has, you know, John Adams' name on it," said Connolly, adding, "But by the time we got to Thomas Jefferson — I mean, that's a signature everybody knows, and that's the point we realized we have to tell somebody about this."

By the time Baker saw it, the book had been taken to the Senate curator's office. He said he knew instantly that the document was an original from the condition of the paper and the ink on it.

Besides dry accounting, the book offers a bit of insight to some of the period's historical chapters.

It contains notes written during the early 1830s from the Treasury Department's auditor, warning that the Senate had overstated its accounts and should return the funds within a month. Baker said he believes this was part of a battle between Congress and President Andrew Jackson over setting up a national bank.

Southern senators who joined the Confederacy simply stopped being paid, he said.

About 60 other Senate record books of lesser historical value were also found.

Baker said he hopes to have the entire volume available on the Senate Web site within six months.