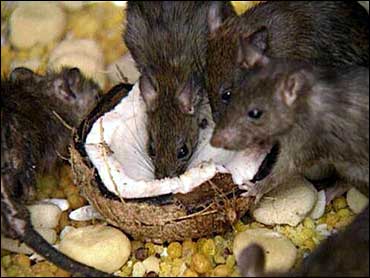 The rat population has risen sharply until there are now about as many of rats as people in England, 60 million, the environmental group Keep Britain Tidy reported Thursday.

Activists say that in 1998, the most recent statistics available, there was a 24 percent increase in the number of rats in England, with the increase mainly in cities and towns.

The group blamed the surge on rubbish from fast-food restaurants and called on people to place their garbage in trash cans.

"Rats eat the equivalent of 10 percent of their body weight each day, feeding on a wide range of food, and there is so much of it left littering our streets that they are coming overground to feast on our rubbish," said Keep Britain Tidy Director Sue Nelson.

Environmental experts cite two other reasons for the surge in the rat population: warmer weather and reductions in pest-control spending.

Modern life is also causing the humble house sparrow to disappear from England's cities and towns.

A government report Thursday listed possible causes of the disappearance of the sparrow, that most English of birds, from its suburban garden habitats as air pollution, domestic cats, sparrowhawks and the spread of disease via bird feeders.

"It is clear that house sparrows ... are finding it harder to make a living, and we may have lost 15 million birds in the last 25 years," said the report's lead editor, Humphrey Crick.

Sparrows seem to be thriving over the border in Scotland and in Wales, but Crick said he could not explain why.