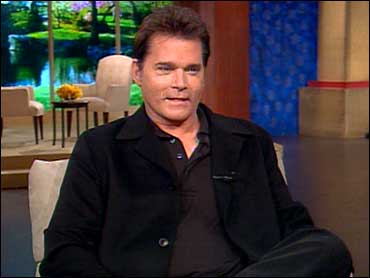 Ray Liotta is no stranger to playing a gangster. One of his best known roles was as mob informant Henry Hill in "Goodfellas." In the new CBS drama "Smith," he plays the boss of a ring of thieves who wants to make the last big score so he can retire and be a family man.

"It's more fun that way than just the bad guy-bad guy," Liotta told The Early Show co-anchor Hannah Storm. "I played a couple of those."

"Smith" is Liotta's first venture into TV in earnest — he appeared in NBC's ER for a short time — but had been offered television roles in the past, even on "The Sopranos." He said he liked the contract he was presented with for "Smith" and he liked the premise of the show.

"I liked the fact it was somewhat of a leading man but also with an edge, had a family life … was a complicated character," Liotta said. "There was a lot of sides to him. Virginia Madsen is my wife. That's not chopped liver."

Liotta plays Bobby Stevens, but the show's title comes from his FBI code name. On the surface, he sells cups as a traveling salesman, but his wife is growing suspicious and is picking up on the signs that he is preparing for a new heist.

"I'm addicted to stealing," Liotta said. "If anybody gets hurt, that's not in the bargain, as far as I'm concerned, and when people get hurt, it bothers me. You know, after a while, the odds have been on my side. And after while, catches up to you. I think I want to get a few takes of money and get out."

In real life, Liotta's work can also catch up to him, epically with the taxing hours of a TV series.

"What's great and against this is everything's on location. Most of the series are at a studio, but ours is all locations. It always seems to be an hour, hour and a half away in L.A. traffic," he said, "…14, 15 hour days, and you're driving. I'm not complaining, by any stretch of the imagination, but it's like doing an independent film. I like that pace. I like things when things are moving along and you're not sitting around waiting."

Liotta also said he prefers the show because he can stay in L.A. near his 7-year-old daughter.

"When you travel, you're missing your little girl that much — it was painful," he said. "It bothered me ... so that was another reason, professional and personal, to do the show."