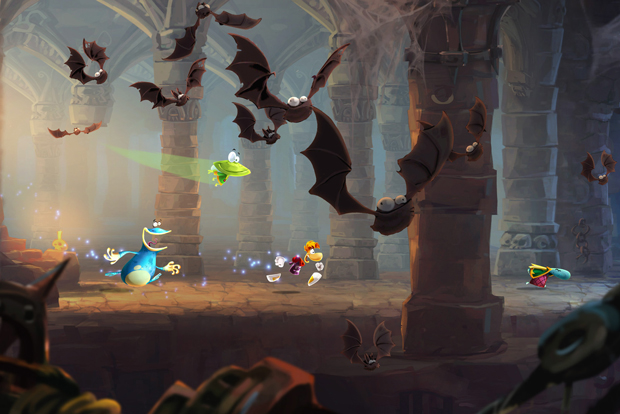 Ubisoft's award-winning platform adventure series makes a return with the newest entry, Rayman Legends. In this family-friendly 3-D action platformer, the bouncy limbless protagonist, Rayman, and his friends discover the mysterious tent filled with paintings and are pulled into colorful new worlds. Players will run and jump through levels, uncovering secret areas of the maps, evading traps and defeating enemies while rescuing the magical blue creatures known as the Teensies.

At the start of the game, the main gallery is introduced. This area is the central hub of the game and is where the Bubble Dreamer, a large whimsical and mysterious being, is found. This area contains paintings, which become portals to different worlds and levels. Other features and unlockables can be accessed from this main gallery as well as other playable characters. You start the game with five heroes already unlocked, the default character being the series' namesake and main protagonist, Rayman. By entering the Hero Gallery, you can select other characters that are unlocked as you progress through the game by collecting firefly-like creatures called Lums or completing special Rescue Levels.

Each world contains several platforming levels, an unlockable boss fight, and unlockable musical level. The main objective of each platforming level is to collect as many Lums as you can while saving the trapped Teensies before reaching the end of the level. Each time you save a teensie, a gold indicator will appear in the upper-right-hand corner of the screen, showing the number and order of Teensies saved. There are also hidden areas that you have to discover to save the special king and queen Teensies of that level.

Every level in Rayman Legends is repayable and the Teensies you've rescued are grouped in the gallery area and indicated in the plaque at the top of the painting. The plaque will also display the cups earned in that particular level. In subsequent playthroughs, Teensies successfully rescued in previously will be replaced by Lums.

These Teensies and Lums are vital for game progress. More worlds and levels are unlocked by rescuing the Teensies. Once a world is unlocked, there is no set order for playing the levels. You can skip around to which ever worlds or levels you'd like adding certain degree of freedom in how you choose to explore Rayman Legends.

Adding even more gameplay to the game, nearly every level of the main worlds has an Invasion Level. These Invasion Level paintings don't appear until they are unlocked at which point a smaller painting will appear alongside the corresponding level painting. In Invasion, enemies from other worlds in the game will invade levels you've already completed, changing them. You'll have just 60 seconds to save three teensies and reach the end of the level.

Rayman Legends' multitude of collectibles also includes Creatures and Back to Origins worlds. Both of these can be unlocked by earning Lucky Tickets via collecting enough Lums in each level. These Lucky Tickets are golden scratch-tickets that reveal a prize: a new creature, a new Back to Origins level, or more Lums or Teensies.

Your creature collection can be accessed via a painting in the main gallery. There are 60 creatures in the game, and each one will provide additional Lums daily. Collecting a good number of these creatures will help the player unlock more things in the game even faster.

The Back to Origins levels, also unlocked through Lucky Tickets, are divided into five worlds that are made up of several levels each. These levels contain recreated maps from Rayman Origins, updated with the art style and feel of Rayman Legends. And just like the other levels in the game, once unlocked, you can play them at any time and in any order.

Rayman Legends also has jump-in/jump-out co-operative play, allowing for up to five players on Wii U and up to four players on Xbox 360, PS3 and PC. As for the Vita, it allows for two players with two connected Vitas. Online features include leaderboards and special daily and weekly challenges offering even more gameplay this platform adventure game.

Though it contains a larger number of levels, Rayman Legends is not an in-depth experience. The story is not really explained thoroughly nor is it woven into the gameplay as much as I would have liked. This lack of focus of any kind leaves the game feeling more like a collection of short levels, each ranging from about five to 15 minutes, than a cohesive experience.

Even with the narrative lacking, the search for missing Teensies and other collectibles keeps it interesting, and the short duration of each level does allow for easy replay. Also being able to jump from one world to another and play available levels in any order keeps the gameplay from getting too repetitive since certain levels and worlds require different approaches. For example, one world has levels requiring the player to drift on air currents while another world will utilize lots of swinging across drops with ropes. The visual style of the game is a positive as well. The bright and colorful worlds of Rayman Legends have a painted storybook quality to them that works well with the style and themes of the game.

Overall, Rayman Legends is a fun game that anyone in the family can pick up and play, and the co-op feature is easy to use. Rayman Legends is rated E and suitable for ages 10 and up, and is available now for Xbox 360, PS3, PC, Wii U and Vita.