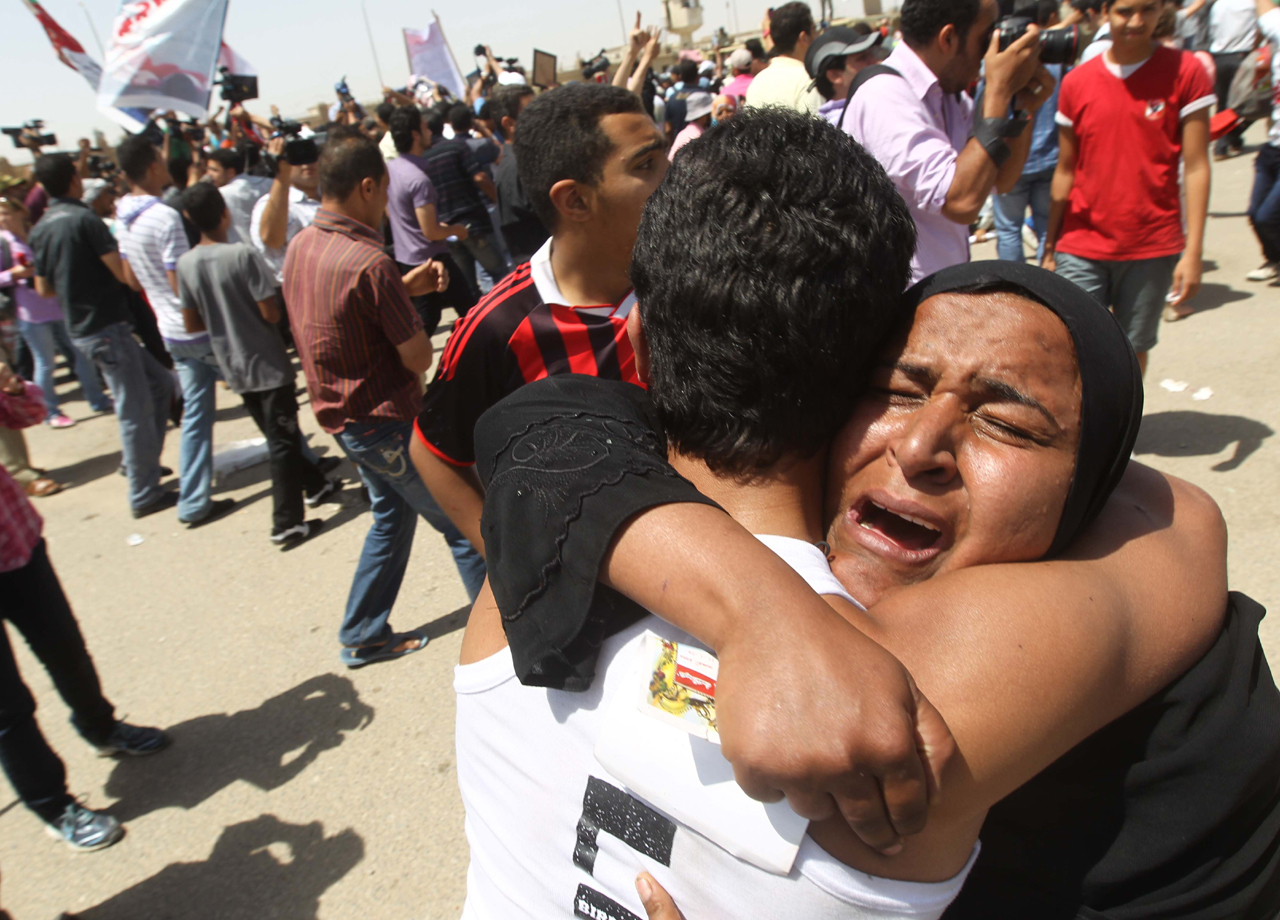 (CBS/AP) CAIRO - Thousands of protesters on Saturday gathered in Cairo's Tahrir Square, birthplace of the uprising against Hosni Mubarak, and in the Mediterranean city of Alexandria on Egypt's northern coast, after an Egyptian court's sentencing of the former president and other government officials, calling the decision too lenient.

Mubarak and his two sons - Gamal and Alaa - were also acquitted on corruption charges (though the sons still face a separate trial on charges of insider trading).

Protesters today chanted slogans denouncing the trial as "theatrical," and against the ruling generals who took over for Mubarak, led by his former defense minister.

"Execute them, execute them!" chanted the protesters in Alexandria.

One of the uprising's key pro-democracy groups, April 6, rejected the verdict, saying judge Ahmed Rifaat at once paid homage to the protesters and ignored the grief of the families of those killed by acquitting the top police commanders.

"We will continue to cleanse Egypt from corruption," the group said.

"Justice was not served," said Ramadan Ahmed, whose son was killed on Jan. 28 last year. "This is a sham," he said outside the courthouse, a lecture hall in a police academy that once bore Mubarak's name.

Angered by the acquittals of the Mubarak sons and six top police officers, lawyers for the victims' families broke out chanting inside the courtroom as soon as Rifaat finished reading the verdict.

"The people want to cleanse the judiciary," they chanted. Some raised banners that read: "God's verdict is execution."

The charges related to killing protesters carried a possible death sentence that the judge chose not to impose, opting instead to send Mubarak to prison for the rest of his life.

Rifaat criticized the prosecution's case, saying it lacked concrete and material evidence and that there was nothing in what has been presented to the court that proved that the protesters were killed by the police. Because those who pulled the trigger have not been arrested, he added, he could not convict any of the top police officers of complicity in the killing of the protesters.

The prosecution had complained during the trial that it did not receive any help from the Interior Ministry in its preparation for the case and, in some cases, prosecutors were met with obstruction.

Just days before the verdict was made public, the state prosecutor leveled new charges of insider trading against the two sons. It now appears that these charges may have been an attempt to head off new public outrage once the acquittals of the Mubarak sons were made public.

It has appeared all along that prosecutions since Mubarak's fall targeting relatively few high level officials and their cronies have been motivated largely by a desire to appease public anger expressed in massive street protests that continued long after Mubarak's ouster.

Scores of policemen charged with killing protesters have either been acquitted or received light sentences, angering relatives of the victims and the pro-democracy youth groups behind the uprising.

Outside the courtroom on the outskirts of the capital, there was jubilation initially when the conviction was announced, with one man falling to his knees and prostrating himself in prayer on the pavement and others dancing, pumping fists in the air and shooting off fireworks.

But that scene soon descended into tensions and scuffles, as thousands of riot police in helmets and shields held the restive, mostly anti-Mubarak crowd back behind a cordon protecting the court.

Rock-throwing and fist fights outside the courtroom left at least 20 people injured, and a police official said that four people were arrested.

Thousands of riot police and policemen riding horses had cordoned off the building to prevent protesters and relatives of those slain during the uprising from getting too close. Hundreds stood outside, waving Egyptian flags and chanting slogans demanding "retribution." Some spread Mubarak's picture on the asphalt and walked over it.

Later, thousands of protesters gathered in Cairo's Tahrir Square, birthplace of the uprising, and in the Mediterranean city of Alexandria on Egypt's northern coast. They chanted slogans denouncing the trial as "theatrical" and against the ruling generals who took over for Mubarak, led by his former defense minister. "Execute them, execute them!" chanted the protesters in Alexandria.

One woman there said she wanted justice for her son. "My son did not commit any crime. How come the sons of Mubarak are set free? My son has lost his eyes," she said.

Mubarak's verdict came just days after presidential elections have been boiled down to a June 16-17 contest between Mubarak's last prime minister, one-time protege Ahmed Shafiq, and Mohammed Morsi of the Muslim Brotherhood, a fundamentalist Islamist group that Mubarak persecuted for most of his years in power.

In a statement posted on his Facebook page, Shafiq said he could not comment on court rulings, but added that the Mubarak trial has shown that no one was above the law in today's Egypt and that no one could recreate the old regime.

The acquittal of the six police officers, he added, did not mean that he approved of their "tactics."

In contrast, a spokesman for Morsi said the verdicts were "shocking" and vowed retribution.

"The blood of our martyrs will not go in vain. We will work as Egyptians for the sake of a just retribution and the retrial of those who committed crimes against this nation," said the spokesman, Ahmed Abdel-Atti.

Morsi and Shafiq will go on a head-to-head presidential runoff on June 16-17.

In Tromso, Norway, U.S. Secretary of State Hillary Rodham Clinton did not comment directly on the sentence handed down today, but said Mubarak's fate is "up to the Egyptian people, their judicial system and their government."

U.S.-based Human Rights Watch called the verdict a "landmark conviction [which] sends a powerful message to Egypt's future leaders that they are not above the law," but criticized the prosecution for failing to fully investigate the case.

"These convictions set an important precedent since just over a year ago, seeing Mubarak as a defendant in a criminal court would have been unthinkable," said Joe Stork, the group's spokesman.