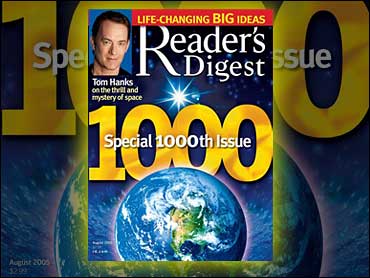 The publisher of Reader's Digest, the country's most popular general interest magazine, said Monday it will file for Chapter 11 protection with a plan to swap a portion of its debt for ownership of the company.

Reader's Digest Association Inc., owned by the New York private equity firm Ripplewood Holdings since 2007, said Monday it has reached an agreement in principle with a majority of secured lenders to erase a portion of the $1.6 billion they hold in senior secured notes. The lenders will get ownership in return.

The planned filing, which does not include operations outside the United States, comes amid declining circulation, an industrywide advertising slump and large debts.

Reader's Digest, the monthly magazine founded in 1922 as a collection of condensed articles from other publications, has been searching for a niche as the Internet upends the magazine industry's traditional business models.

In June, Reader's Digest announced it would cut the circulation guarantee it makes to advertisers to 5.5 million, from 8 million and lower its frequency to 10 issues a year from 12.

In the second half of last year, the U.S. edition of Reader's Digest had circulation of 8.2 million, 2 percent above the guarantee to advertisers but 12 percent below circulation a year earlier. Its decision to adjust to rate base suggests expectations that circulation will drop further.

The company said Monday it will skip a $27 million interest payment on its 9 percent notes due in 2017 while it looks to build support among lenders for its restructuring plans.

The agreement includes $150 million in "Debtor-in-Possession" loans to finance the company during bankruptcy protection. Overall, the company plans to shrink its debt from $2.2 billion to $550 million following Chapter 11. It said the "vast majority" of suppliers will be paid in full under the bankruptcy plan.

The company said it will seek further agreements from lenders and other stakeholders before making a formal bankruptcy filing within a month.