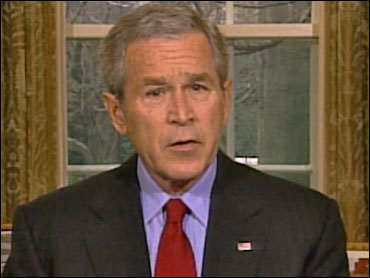 It seems that many Against the Grain readers agree that President Bush is indeed "The Decider." In fact, that seems to be exactly what some of you don't like about him! But as the rest of you voiced your opinions, you reminded us that you dear readers, the American people, are the real deciders.

He is the boss. No one pulls his strings, except in that they tell him ONLY what they want him to hear (or know), so that the ONLY conclusions he can come to are the very ones they want him to come to. Yes, Bush is The Decider, but he gets only carefully cherry-picked input.

He's very smart and crafty but he has very limited knowledge of history and no awareness of the lives of anyone outside his circle of the very rich and very privileged – and he doesn't have any interest in finding out more.

I don't "misunderestimate" him; I despise him. Many people have died, been maimed and slipped into poverty because of his arrogance and ignorance. He is not funny, amusing or innocent; he is a danger to Americans and to the world.

I think you miss the point, as does this President. He is not "the decider" in question; the American People are the deciders. As such, we should be held accountable for the War in Iraq; for succumbing to the fear-mongers in government and the press; for sanctioning extraordinary rendition, torture and the trampling of our magnificent Constitution in the name of security; for accepting an economy that results in corporate control of government and the creation of a two-party meritocracy based on wealth, greed and incumbency.

So it doesn't really matter whether the President is the decider or a marionette. For it is not on George W's watch, or Karl Rove's or Dick Cheney's watch, that all this has occurred. It is on our watch: yours, mine and our neighbors'. Maturity requires that we each take personal responsibility and hold ourselves accountable for the dimming of our country's luster.

I really have to disagree when you write that he wins elections against people who think he's dumb. He didn't win the 2000 election or 2004. Enough evidence is in about the corrupt and fraudulent elections orchestrated by the Republican Party.

And he really is dumb.

It is says a lot about our country that we take it for granted that if you are wealthy, you are automatically thought to be smart and given a free pass on your credentials for running anything. I think that if nothing else, George Bush brought that point into clear focus. At least for me he has.

And, by the way, he is wrong about being "The Decider." Actually you and I and all the rest of the people in the country are "The Deciders." We decide with our vote.

I don't know if Bush is manipulated by Karl Rove or Dick Cheney, and ultimately, it doesn't matter. Bad decisions come out of the Bush administration with alarming consistency. No matter how the decisions are made, I hold Bush responsible. Even if Bush isn't doing the thinking, he chose his advisers.

I also believe Bush is a smart guy. But everyone knows someone who is a genius in one area, and an imbecile in another. My take on Bush: He doesn't have the emotional maturity to think objectively. What he wishes to believe, what he wants to believe, and what is convenient for him to believe will always drive his thinking and his decisions.

That was the best and most accurate article on Bush that I have read yet. You were right on!!

It is too late. Too late for mainstream journalism to finally notice and point out that George W. Bush is a fop and a flop. Language skills, including grammar and syntax, and morphological usage are the paramount ways in which intellect is assessed. They almost directly correlate to cognitive skills. If W is "extremely smart," it stands to reason that he'd have picked up on a little more of our common lexicon in high school or college, where these skills are taught. That he'd have practiced using them as he trod toward the White House. Oh, that's probably when he was becoming "very wily," as we've certainly come to know he is. He was elected on a fuzzy belief that he was upright and credible, our collective "horse sense." He turned out to be bigger ass than any Democrat, and he proves it every time he speaks.

Thank you for publishing this article, Bush: The Decider-In-Chief by Dick Meyer, regarding the President's elocution. I think it is remarkable that somebody like Meyer is so incompetent that he is incapable of understanding that Bush chose to use this language because the Washington Press Corps was behaving like a gaggle of retarded baboons over the Rumsfeld issue.

What does it take to get through to "you people?"

The truth is you can be smart at some things and dumb about other things. If you can understand what you are good at and what you are bad at, then you ask for help when you need to.

Mr. Bush needs a lot of help. He is a 'C' student that won't listen to his dad. He is bad at seeing into the future. He is almost always wrong.

Overall I think he is a good old boy but he is in way over his head.

I have always felt you were a brilliant journalist....But did you get a lobotomy before writing "Bush: The Decider-In-Chief" piece???

Bush is a hollow shell puppet with the intellect of a middle school child and IS being 'operated' by the Rasputins mentioned in your article.
He is a sad embarrassment to each and every American citizen. A dolt.

BUSH IS A DIVIDER NOT A DECIDER

I can't wait to have a Commander in Chief again; maybe someone with a little experience on the battlefield and in the art of public speech.

I don't feel comfortable having a war time president and his influences that have only strategized. They obviously distorted the Powell Doctrine, written by someone with battlefield command experience. I guess that's a choice and our Decider-in-Chief is on top of it.

When I read the proclamation of the great one, "George," that he had bestowed upon himself a title such as this, I was waiting for people with the pen to at least reference this honor in someway.

Dick Meyer seems to be the only one left with ink in that pen, or perhaps he is the only one with enough guts to say what is there. Reading his article on the "Decider" was a little like reading Catch 22. In one instance Major Major in his stupidity can bring nothing but laughter. Then the next sentence brings to life, the little red-headed boy laying on the floor of the B-24 his insides smeared from his belly to his feet crying for mama, he is cold and the laughter is gone.

If you still want to send in an e-mail, you'll have to read a real column to find the address.