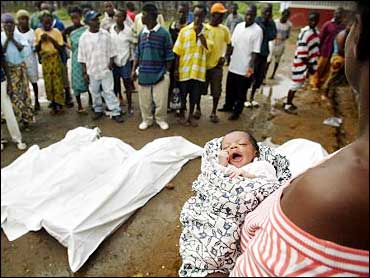 The U.S. ambassador to Liberia on Sunday appealed to rebels to pull back from the bloodied capital to allow food and other aid into the city crowded with hungry refugees, while shelling around the rebel-held port killed at least 16 civilians.

Explosions rocked Monrovia as rebels and government forces battled at key crossings leading to President Charles Taylor's downtown stronghold. Government commanders and residents reported that the rebels were stepping up their eight-day drive into the city.

Rebels are pressing forward in their third attempt in two months to take Monrovia, an isolated and disease-ridden city of at least 1.3 million hungry residents and refugees. Their goal: driving out Taylor, a former warlord behind nearly 14 years of ruinous conflict in the once prosperous West African nation.

The main rebel movement "needs to show that they have regard for the people of Liberia, that it is not indifferent to the great human suffering that is taking place here," Ambassador John Blaney told reporters at the heavily guarded, high-walled U.S. Embassy.

The U.S. ambassador urged the Liberians United for Reconciliation and Democracy (LURD) movement to pull back to the natural boundary of Po River, six miles outside the capital. The withdrawal would open up the port and camps outside the refugee-choked city for vitally needed food and aid.

Blaney said Taylor had agreed to the proposal. The American urged LURD to do the same. "If they want to get to a post-Taylor era, this is the way to do it," he said.

Sekou Conneh, the rebels' civilian chairman, told The Associated Press that they would retreat only when peacekeepers were in place.

"We agree to fall back, but we want the peacekeepers to come," Conneh said. "We don't want to hand over the port to Charles Taylor."

Under international pressure to intervene, President Bush has ordered U.S. ships to take up positions off the coast of Liberia, ready to support a West African-led peace force, which has been delayed amid debates over funding by the debt-strapped African nations.

President Bush has demanded that Taylor, indicted for war crimes in neighboring Sierra Leone, step down. Taylor says he will do so, accepting an asylum offer in Nigeria, only when peacekeepers arrive.

Fighting has focused on the port and bridges leading to downtown, one of Taylor's last strongholds.

After a night of combat, at daylight rebels were in what had been a government-controlled suburb around the bridge — claiming to be in control.

"This morning we saw fighters coming in, telling us not to panic," one resident, reached by telephone, said in the New Georgia neighborhood, gunfire and booms echoing behind her. "I'm scared," she added, saying she was too fearful to give her name.

Taking northern neighborhoods around the bridge would give rebels a foothold on the mainland, from which they could battle their way toward the government-held downtown.

New bombardments also crashed into neighborhoods. One round landed before dawn Sunday on a tin-roofed shack near the embattled Old Bridge, killing four, according to aid workers collecting bodies in the area. Another fell on a nearby house, killing two.

Taylor claimed Saturday that as many as 1,000 people have died since rebels launched their third attempt in two months to take the capital. Aid workers place the week's toll at about 400.

Government and rebel officials have traded blame for the shelling in densely populated neighborhoods. Witnesses in areas closest to the fighting claimed Sunday that some mortars fired by the government were landing short of their rebel target, killing residents on their own side.

Insurgents of the Movement for Democracy in Liberia in recent days had advanced to within 30 miles of Buchanan, Liberia's second-largest city and home to a key port.

Rebels allegedly backed by the governments in neighboring Ivory Coast and Guinea, control at least 60 percent of Liberia, a country founded by freed by American slaves in the 19th century.

West African leaders have pledged to send two Nigerian battalions to Liberia within days — the vanguard of what they say should be a 3,250-strong international force to bring peace to the devastated nation.

Deputy Defense Secretary Paul Wolfowitz reiterated Sunday that the U.S. forces "are going in when there is a cease-fire, when Charles Taylor is leaving, has left."

Wolfowitz also told "Fox News Sunday" that the U.S. role is to assist the United Nations and West African countries "to stabilize the situation, to avert a humanitarian disaster.

"And as part of that, it's necessary to get Charles Taylor to leave the country and for the U.N. to begin a political process," Wolfowitz said.

Outside Rome, Pope John Paul II called on Liberia's combatants to lay down their arms to allow the international community to come to the aid of the country's people.

"In the face of the suffering of that dear people, we cannot help but ask all those who have a weapon in their hands to put it down to give room to dialogue and to the concerted action of the international community," John Paul told pilgrims outside his summer palace.