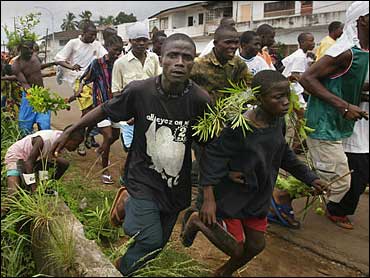 Gunmen spread out on rooftops Sunday as government and rebel fighters in shorts and flip-flops traded grenade and machine-gunfire in an all-out battle for Liberia's war-ruined capital.

With promised peacekeepers yet to arrive, warlord-turned-President Charles Taylor has vowed to fight to the last man in Monrovia — his only remaining stronghold in the country founded more than 150 years ago by freed American slaves.

Rebels pounded the city with mortars, pushing deeper into the northern suburbs and sending a new wave of terrified residents fleeing with bundles of possessions balanced on their heads. The casualty toll wasn't clear, but hundreds were killed when rebels fighting to oust Taylor last penetrated the city in June.

"We have been pushed to the wall," Defense Minister Daniel Chea said, gunfire rattling in the background. "We made all the overtures of peace, and now we are fighting for our lives."

Taylor has pledged to resign and accept an offer of asylum in Nigeria — but only after peacekeepers arrive to ensure an orderly transition. Meantime, President Bush is considering sending U.S. troops, although he has set Taylor's departure as a condition.

Gen. Abdulsalami Abubakar, the former Nigerian military ruler mediating peace negotiations in Ghana, appealed Sunday for an end to the fighting which he said was endangering talks aimed at setting up a unity government to oversee fresh elections.

Officials for the rebel movement Liberians United for Reconciliation and Democracy insisted they remained committed to the talks and were only trying to pressure Taylor to step down, as promised under the June cease-fire.

"We're not trying to do a military takeover," LURD delegate Joe Wylie said in Ghana. "But we can help to speed things up. Since Taylor signed the cease-fire, he is running his mouth and amending his promises. We want to apply a little pressure on him. We want him to leave now."

In an interview with The Associated Press, Taylor said Saturday that until peacekeepers arrive he would "fight to the last man" for his capital.

Government fighters, who put up little resistance as rebels swept south into the city Saturday, made a stand Sunday at two bridges leading from the rebel-controlled port into downtown. Snipers deployed on rooftops and fighters waged pitched battles in the streets.

By afternoon, government forces had pushed back across the bridges into the southern tip of Bushrod Island, Chea said. But rebels had gained control of a third bridge, moving into the northern suburb of New Georgia, from which they were poised to make a stab at downtown from the east.

Jubilant pro-Taylor militia fighters dragged what they said was the body of a rebel fighter to police headquarters where it was paraded before the few civilians remaining in the area, deputy police director Saa Gborlie said.

Furious at the resumption of bloodshed, many Liberians have demanded to know what is delaying peacekeepers they hope will be lead by Americans.

President Bush has promised assistance to West African nations planning to send more than 1,500 soldiers to enforce the often-violated June 17 cease-fire. But he has yet to decide whether to contribute troops.

"We hold George Bush responsible for this mess," shouted a member of Taylor's elite Anti-Terrorist Unit as throngs of civilians hurried through his checkpoint.

Long columns of fleeing residents were on the move, making their way through government checkpoints where bags and rolled-up mattresses were searched for weapons.

Molley Paasewe abandoned his flimsy, zinc-roofed house and squeezed with about 50 others into a neighbor's basement. Mortar fire shook the basement through the night, and bullets pinged against the walls.

When they emerged in the morning, they found a man's bloodied corpse lying in the street. As a crowd clustered around the body, another man was hit in the head by a stray bullet.

"I don't understand why up to this time the peacekeepers haven't come," he said, as he prepared to return to the basement for another night. "Get us out of this Hell."

Mortars slammed into the neighborhood surrounding the U.S. Embassy compound overnight, and a Liberian security guard there was shot and injured. Sporadic shelling and gunfire continued in the area throughout the day Sunday.

Wounded civilians were pushed in wheelbarrows to clinics run by international aid groups.

By Sunday afternoon, French medical group Medecins Sans Frontieres, or Doctors Without Borders, had received one dead and 40 injured civilians. A Liberian staffer was also killed when a mortar struck his home Saturday night.

The British aid group Merlin treated 30 more civilians, while the city's main John F. Kennedy hospital received about a dozen injured, all but one of them soldiers. One soldier died, hospital officials said.

A French news photographer, Patrick Robert, was shot Saturday in the chest and arm covering fighting at one of the bridges. He was reported in stable condition Sunday.

Heavy looting was reported downtown and in some eastern neighborhoods, including at a hospital where communications equipment and vehicles were stolen.

Taylor launched Liberian's last civil war in 1989, emerging in 1996 as the country's strongest warlord. He was elected president the following year, and now faces rebels who include some of his former rivals from the earlier war.

A U.N.-backed tribunal has indicted him on war crimes for supporting Sierra Leone's notoriously brutal rebels.