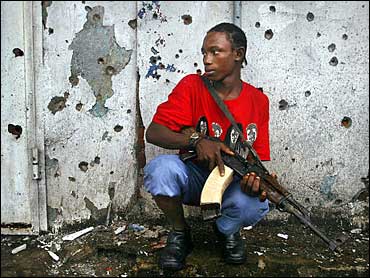 Rebels captured the second-largest city of Buchanan on Monday, depriving embattled President Charles Taylor of his last significant port outside the besieged capital.

Gen. Benjamin Yeaten, a leading government commander, confirmed that the strategic city, 60 miles southeast of Monrovia, fell to rebels from Liberia's second rebel group, the Movement for Democracy in Liberia.

Yeaten said government troops remained on the outskirts of the city and were planning a counterattack.

Taylor's forces took off running as rebels advanced into Buchanan, said John Mensah, a resident reached by telephone there, who added the rebels are "now in complete control of Buchanan."

During the rebel takeover, the Buchanan office of the international humanitarian group Merlin was looted, according to Merlin office workers in the capital.

Fighting in Buchanan, a city of 40,000 crowded now with tens of thousands of refugees, came as Liberia's leading rebel movement, Liberians United for Reconciliation and Democracy, pressed its bloody 9-day-old siege of the capital.

Rebels of the main rebel group — Liberians United for Reconciliation and Democracy — seized Monrovia's port July 19 at the start of their siege of the capital, now in its ninth day.

Tens of thousands of civilians have fled to Buchanan in recent days, escaping the fighting in Monrovia.

U.S. Ambassador John Blaney on Sunday said he had urged the Movement for Democracy in Liberia rebels to spare the coastal city.

The Movement for Democracy in Liberia has fewer fighters than the larger rebel group but is believed to be better-disciplined and better-armed. It is allegedly backed by neighboring Ivory Coast, as a way of blocking incursions onto its soil by Liberian fighters.

One rocket, fired by President Charles Taylor's troops from a high building, fell short and plowed into the bedroom of a home on the government-controlled side of the capital, injuring eight civilians, aid workers said.

A Nigeria army spokesman said the first peace troops could deploy as soon Tuesday for a force seen as crucial to ending two months of fighting for the capital.

In Accra, Ghana, however, another day in what have been weeks of off-and-on talks on the peace mission brought no immediate announcement of any firm deployment date.

Nigerian Brig Gen. Festus Okwonkwo, who would oversee any deployment, called sending forces this week "unlikely" as he went into meetings with representatives of other West African countries, U.N. peacekeeping operations and the U.S. military's European Command.

Officials of debt-strapped Nigeria, the region's military power, say debates about who should bear the cost are slowing deployment, and have asked the United States for greater assistance.

As talks play out, shelling and other fighting accompanying rebel assaults on the capital have killed hundreds of civilians since June. With Monrovia's strategic port in rebel hands, the refugee-choked city of more than 1.3 million is desperately short of food, water and aid. Hunger and disease are building.

Insurgents are driving home their 3-year-old war to force out Taylor, a former warlord blamed in 14 years of near-continual conflict in once prosperous Liberia.

Monrovia's people increasingly speak of the promised peace force with impatience, and despair.

"We are hoping that the peacekeeping forces are coming this week to relieve us of all this misery," said the Rev. Franklin Holt, president of the capital's downtown Monrovia College, where up to 2,000 people have taken shelter in the campus' concrete buildings.

Under international pressure to intervene, President Bush has ordered U.S. ships to take up positions off the coast of Liberia to offer still-unspecified support for a West African-led force.

Deputy Defense Secretary Paul Wolfowitz on Sunday repeated U.S. insistence that any American role in the peace force would depend on the West Africans deploying first, and on Taylor leaving.

Mr. Bush has expressed worries that U.S. forces, already committed to Iraq and Afghanistan, could be overstretched by a role in Liberia. In addition, the U.S. is wary of African peacekeeping after the deaths of American soldiers in Somalia in 1993.

Nigeria has promised two battalions with a total of about 1,300 men to enforce any cease-fire reached in Liberia. The fighters would be the vanguard of what West African leaders say should be a 3,250-strong international force.

One Nigerian battalion is to peel off from a U.N. peace force already in Sierra Leone. The second, a mechanized infantry brigade, is to come from Nigeria.

Okwonko, the brigade commander, indicated later Monday that yet more talks were planned, however.

Of the American role, Okwonko said the United States was promising only logistical support and support at Monrovia's port. He didn't elaborate.

Taylor, offered asylum by Nigeria, says he will leave only when peacekeepers arrive. Taylor has since June held out promises that he would step down, only to later hedge on timing or renege outright.

Rebels were reported to have bypassed one of the spans over the weekend, crossing into Monrovia's government-held mainland from the port.

A government officer and residents of the area around the bridge said rebels were still on the government-held side Monday, but appeared to be pulling back.