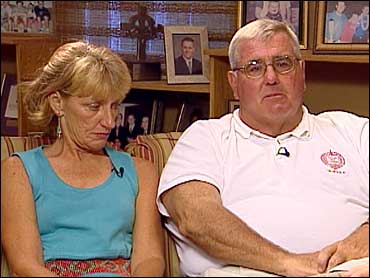 Five years later, John Duffy's company is doing very well, but he and his family live every day with the pain of the loss they suffered.

"I think it's important," Duffy told The Early Show co-anchor Harry Smith, his voice breaking, "that people don't forget, you know, 3,000 innocent people lost their lives and … you know, I feel it's important that the story be told and that people are reminded of the horror of that day."

John was driving to work at the World Trade Center and could see the flames coming from the North Tower.

His 23-year-old son, Chris, and more than 100 other employees were already at work on the South Tower's 88th and 89th floors.

"And, you know," he recalls, "your only chance of getting out was that 15 minutes between the first plane and the second plane."

When the second plane struck just below his office, John's son and the other employees were trapped.

Sixty-seven lost their lives, including Chris.

When John headed home, his wife, Kathy, was waiting.

"It was a feeling," she told Smith. "It was just not a good feeling. In my heart, I knew that this wasn't good news at all."

So much was lost that day and, five years later, the emotions are still raw.

John lost Chris, he lost his co-CEO, and dozens of employees, many of them critical to the company.

How could and did her carry on?

"We felt we had -- you know, almost a moral obligation to the rest of these families that, you know, whatever we could do for them in the future, we needed to do. And, the best thing we knew, really, the only thing we knew how to do was run a broker-dealer, you know," John explained.

With what Smith describes as "unbelievable determination," and without missing a single day of trading, John and his colleagues rebuilt the company, more than doubling the number of employees.

It was anything but easy.

Sometimes, simply interviewing a job applicant could open the floodgates.

"The interviews were awkward," John says. "Most people would come in and apologize. And, you know, that -- that would just kind of trigger, you know, all of your emotional hot buttons, so, there were probably some interviews where I was doing more crying than questioning."

John's wife Kathy also knew she had to kep going.

"I realized," she says, "there was nothing I could do for Christopher anymore. I couldn't help Chrissie. But I have four (other) children, and I have a husband, which I was grateful I didn't lose that day, too. And, they deserve to be happy. They need to live and be happy."

Chris worked hard and he played hard. His family still celebrates his spirit.

His brother, Brian, told Smith that Chris was the chief instigator of mischief.

"You don't realize," Brian says, "how much a part of life he was until he's gone. We just did everything together, everything."

John's career on Wall Street has, Smith says, become the stuff of legend.

And, he's giving back.

At Cardinal Hayes High School in the New York City borough of the Bronx, a new football field was recently dedicated in his honor.

Time hasn't healed his wounds, John says, but, "I think there's more important things in life than hatred. I can't say I've forgiven these people. But i think -- I choose to have a kind of more positive or constructive outlook on life that there are people that I can help."

The recovery effort after 9/11 did manage to find remains of Chris Duffy at Ground Zero.