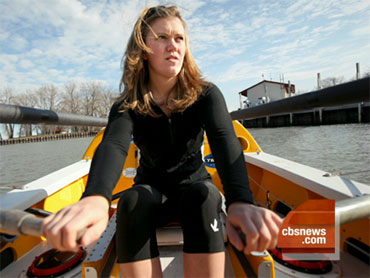 Katie Spotz says she was the worst rower on her college team.

But on Sunday, she became the youngest person to row across an entire ocean alone, and the first American to row a boat without help from one continent to another.

After exactly 70 days, five hours, and 22 minutes in the Atlantic, the 22-year-old from Mentor, Ohio arrived Sunday in Georgetown, the capital of the South American nation of Guyana. She'd departed from Dakar, Senegal, in Africa, on Jan. 3, and endured rough seas during the 2,817-mile crossing.

In "The Early Show"'s New York studios Thursday, Spotz told co-anchor Maggie Rodriguez, "It was like the idea (for the trip) found me. I was on a bus in Australia, just chatting with a person next to me, and they mentioned their friend rode across the Atlantic and I thought it sounded like a good idea.

"I like setting the bar pretty high and challenging myself as much as I can."

Her parents, though, were non-too-thrilled. "They immediately said, 'No, you're not.' They certainly didn't want their 22-year-old daughter out at sea alone," Spotz chuckled in recalling their reaction for Rodriguez.

The boat was 19 feet long. "I had a cabin in the back that I would sleep in. It was pretty much the size of a coffin. And then I had the rest of my supplies out in the bow."

Spotz says she had a tracking unit, "but other than that, I was completely alone at sea. I didn't even see a human until over two months into the journey." She also had a satellite phone and laptop computer with her. The only support boat she had was a Coast Guard vessel that escorted her to Guyana's coast.

As for what Spotz called "the wildlife," she said it "wasn't terribly threatening. One day, I felt a bunch of bumping on the bottom of the boat and it looked hike sharks, but it ended up just being about eight or nine tuna fish, but still it was enough to get the heart beating."

Mother Nature did present problems, though. "I had some near capsizees," Spots told Rodriguez. "As I was rowing into South America, the winds and currents were in opposition, so it caused some really turbulent waters. So I actually ended up rowing another 400 miles just to make a safer landfall."

As she approached the continental shelf, waves crashed over the boat and Spotz worried it would tip over. And on Saturday, she had to use a fire extinguisher after a piece of tracking equipment caught fire.

Spotz says she "had half-a-million calories on board, and the majority of those calories came from dehydrated meals. And I supplemented them with energy bars and energy gels, trail mix."

She spent the entire time sitting of sleeping, never getting to stand up. "When I arrived, they had me climb up a ladder and I expected I wouldn't even be able to walk. And as soon as I had my feet planted, I was just swaying back and forth. It was a real challenge."

In essence, she'd forgotten how to walk. "I just kind of was in the cockpit and it's only about four feet long."

But she says she's not through with her adventures. "I definitely have some ideas," she admitted to Rodriguez, "but I wanna let my mom kind of relax and have some rest before worrying her with the next one!"

In Guyana Sunday, Spotz told reporters, "The hardest part was just the solo part," saying she struggled with boredom and had trouble sleeping inside the cramped rowboat.

Spotz rowed for as many as 10 hours a day with breaks for naps, navigation and boat maintenance. At night, she would drift aboard the specially designed ocean row boat, which had equipment including solar panels for power.

"At night I would update my Facebook and e-mails. There is not much else to do on a rowboat."

She rowed to raise money and awareness for the Blue Planet Run Foundation, a non-profit whose goal is to bring clean drinking water to the estimated 1 billion people worldwide who lack it.

"The records are just a bonus for Katie. Rowing the Atlantic and raising funds for clean water are the things she really cares about," said her coach, Sam Williams.

The record for the youngest rower to cross an ocean solo was set by Oliver Hicks, a British man who was 23 when he rowed from New Jersey to England in 2005, according to Kenneth Crutchlow, the London-based executive director of the Ocean Rowing Society. He said his group will have to certify Spotz's journey but she appears to have broken the record.

In 2008, Spotz swam the length of Pennsylvania's 325-mile Allegheny River, and she has cycled across the United States.

Her family was extremely relived to see her make it through the latest adventure.

"The first thing I did was call my wife in Ohio to tell her she landed safe and sound," said Dan Spotz, her father.