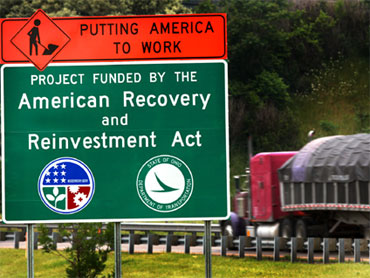 (AP Photo/Plain Dealer, Scott Shaw)
For the last few months, the federal government's stimulus-tracking Web site has been assailed by critics who argued that a private sector effort called Recovery.org has been doing a better job with fewer errors.

With a relaunch this week of the official Recovery.gov site, the Feds are now competitive again. The new Web site features an easy-to-use map that lets you zoom in and click on green, blue, and pink dots that represent (respectively) where contracts, grants, and loans from the $787 billion stimulus legislation are ending up.

One of the most laudable aspects of the new Recovery.gov is the ability to download at least some of the data in Excel and XML format -- meaning researchers and data-crazed citizens can analyze it themselves. Next month, reports from recipients of stimulus funds are scheduled to become available.

The revamped Recovery Accountability and Transparency Board Web site comes thanks to a company called ESRI, which is located near San Bernardino, Calif. and specializes in translating complex data into computer maps. In April, ESRI proposed using the Web to "enable people to see, understand, evaluate, and give feedback on government decisions."

Still, even the relaunched site isn't perfect. It doesn't seem to show a roughly $35 million bid from the town of Millbrae, Calif. for water pollution control, which Recovery.org does. It also doesn't appear to allow comments -- again, something that Recovery.org permits -- and a link to a promised tutorial doesn't work.

Even with these flaws, it's still a timely reminder of how much federal data is locked away from the public (either intentionally or through obscurity and bizarre data formats), and how much more easy it is to navigate with a map-based interface. Now if only it could display the jobs that were lost because much of the stimulus funds are being doled out to fix roadway grates near bike paths in Los Angeles instead of refunded to Americans through an across-the-board tax cut...