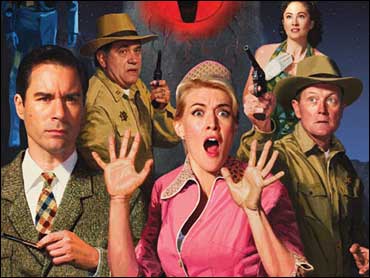 Classic sci-fi B-movies of the 1950s have served as seemingly endless material for modern satire and camp, as evidenced with the likes of "Mystery Science Theater" and Tim Burton's "Ed Wood." But now, director R.W. Goodwin (a veteran in the world of television who helmed many classic episodes of the popular series "The X-Files"), has taken a more serious and dramatic approach to the genre with his new release, "Alien Trespass," starring Eric McCormack of "Will And Grace" fame.

For this filmmaker, it was more about authenticity then laughs. "We wanted to use the same techniques as they did in the 1950s," Goodwin said in a recent interview with CBSNews.com. "The people that made those films were serious about that," he also said, "I wasn't trying to make a spoof."

With an unusual approach, Goodwin hopes to offer a more unique perspective which hasn't been used in past film projects which recreated this era. "I wanted to truly transport [the viewer] to a different time when life was slower," he explained of his reasoning for such a rather unprecedented film experiment.

Set in 1957, "Alien Trespass" focuses on a small town and its residents' reaction to an invasion by an evil extraterrestrial named Urp who devours human beings. A scientist (McCormack), a sexy diner waitress (Jenni Baird from "The 4400"), and two bumbling police officials (Robert Patrick and Dan Lauria) all convey 50's stereotypes with complete sincerity.

Goodwin had nothing but praise for his star actor McCormack, as the director says that this was the most challenging role in the film. "With Eric's role, the tendency would be to go jokey with it, but that wouldn't work," Goodwin said of McCormack's performance.

With low budget special effects and often unintentionally hilarious dialogue, the director says that it is far easier to parody this style of filmmaking than to truly pay homage to the level of entertainment these 50's-era B-movies provided. As a youth, Goodwin himself spent countless afternoons inside a multiplex watching these films, and now he hopes to replicate that experience for today's audiences.

In keeping with this style, hardly any CGI is used in "Alien Trespass," as most of the effects were created through the same low budget techniques from those sci-fi cult classics. The shooting schedule was also considerably shorter than most films produced today.

"It was tough during the first season of the 'X-Files,' but it was eventually engrained in me to shoot fast," the director explained, "So my background on TV certainly helped me to shoot this film in just 15 days." While this is a very short time to shoot a full length feature, Goodwin was confident of his cast and crew throughout filming. "We knew we were doing something different," he said.

And "Alien Trespass" is certainly different, as Goodwin hopes to recreate the creepy and fun feelings invoked when watching such classics as "Forbidden Planet" and "The Blob."