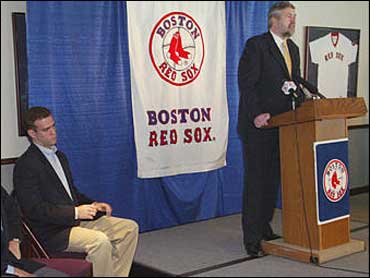 The Boston Red Sox made 28-year-old Theo Epstein the youngest general manager in baseball history Monday, ending a long search for a team that has undergone a front-office overhaul.

The Red Sox had been without a permanent general manager since Florida financier John W. Henry bought the team in spring training and fired Dan Duquette.

Mike Port was interim GM for the season and was a candidate for the long-term job that went to Epstein. The team said Port has been invited to remain as vice president of baseball operations.

Epstein, who was raised near Fenway Park in suburban Brookline, became director of baseball operations for San Diego in 2000, when Red Sox president Larry Lucchino was running the Padres. Epstein also spent two years each in San Diego's media relations department and as a baseball operations assistant.

Randy Smith, previously the youngest GM, was 29 when he was hired by San Diego in 1993.

"After a thorough and extensive search of candidates throughout baseball, we concluded that the right person was right before our eyes," Lucchino said at a Fenway Park news conference. "We believe this franchise will benefit from a new structure and fresh philosophies."

When the group headed by Henry and Lucchino bought the Red Sox in February, they brought Epstein to Boston as an assistant general manager. From the start, there were whispers the Yale-educated Epstein would eventually get the GM job.

"Our common goal is to bring a world championship to Boston," Red Sox chairman Tom Werner said. "Irrespective of his age, we are confident Theo is among the best and brightest, and the brightest, in baseball. We believe that the team he'll assemble will achieve results for which we so yearn."

Oakland GM Billy Beane spoke glowingly of Epstein on Sunday night. Beane had been Boston's first choice, even accepting the job before deciding to stay in Oakland for family reasons.

"He's a bright, passionate individual," Beane said. "I think the world of Theo."

Epstein worked with Port to represent Boston at the recent general managers' meetings, and he also worked on negotiating compensation for the A's when it was thought Beane would take the job. But a day after accepting a five-year, $13 million offer, Beane decided to stay in Oakland.

Thomas will also be kept on, the team said.

On Nov. 14, Lucchino said the ideal candidate would have experience as a major league GM.

"Experience in the front office of a baseball team, we put that right near the top of the list," Lucchino said. "It does not necessarily have to be as a GM, but it does have to be substantial front office experience."

To make up for Epstein's relative inexperience, the Red Sox are expected to surround him with GM veterans, possibly including Thomas and Port. Jim Duquette and former Montreal Expos GM Jim Beattie were also contacted about taking a position in the Boston front office.

"This is not a situation where there is only one piece to the puzzle," Lucchino said after being jilted by Beane. "Billy represented one particular approach, a very strong general manager. But there are other approaches to this."