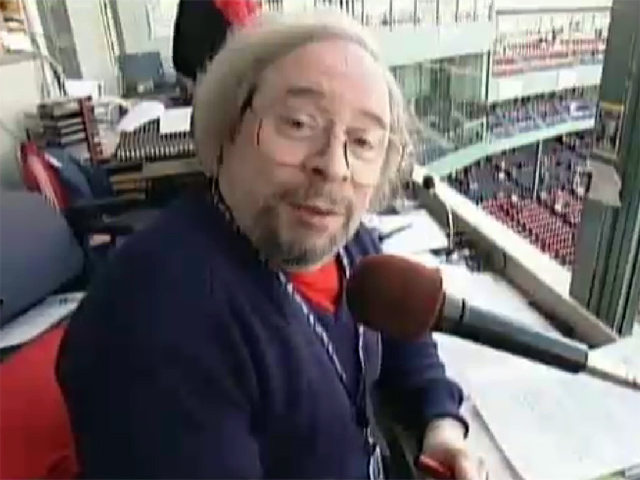 (CBS/AP) BOSTON - Boston Red Sox public address announcer Carl Beane, the voice of Fenway Park whose booming baritone called ballplayers to the plate for two World Series champions, died on Wednesday after suffering a heart attack while driving. He was 59.

"We are filled with sadness at this tragic news," Red Sox president Larry Lucchino said in a statement issued by the team that attributed the death to a heart attack. "His legion of friends with the Red Sox and the media will miss him enormously, and all of Red Sox Nation will remember his presence, his warmth, and his voice."

The Worcester District Attorney said that Beane died in an accident after his car, an SUV with a spare tire cover stitched to look like a baseball, crossed the double yellow lines and left the road before hitting a tree and a wall. He was pronounced dead at Harrington Hospital in Southbridge a short time later, according to a release from D.A. Joseph D. Early Jr.

A longtime fixture in the Red Sox media who provided radio reports and gathered sound for broadcasters, including The Associated Press, Beane landed what he called his dream job when he won a competition for the job announcing the lineups at Fenway Park after the 2002 season. In his second season, he announced the home games of the World Series when the Red Sox won the championship to end an 86-year title drought.

Family members were too distraught to talk with CBS station WBZ-TV, but a neighbor says Beane talked often of his dream job. "He liked knowing the people, getting together with the players, he would come down and tell me about the players," said Karen Horton.

Beane told WBZ-TV's Lisa Hughes back in 2007, "This was the job I was put on earth to do, I really believe that". His website has him showing off his World Series rings, relishing the fact he was able to announce the games

With his voice familiar throughout New England to the millions of fans who filled Fenway each year, Beane was also hired to work as a master of ceremonies, narrate commercials and announce wedding parties. According to a 2008 interview with Boston Magazine, grooms would tell Beane they were more nervous to meet him and try on his World Series ring than they were when reciting their vows.

"When I get that instant response, a feeling washes over me like, `This is where I should be,"' Beane told the magazine. "This is what I know I was put on Earth to do."

As a tribute to longtime announcer Sherm Feller, one of his predecessors, Beane used many of the same expressions, including his opening, "Ladies and Gentlemen, Boys and Girls, Welcome to Fenway Park." But Beane also considered longtime Yankees announcer Bob Sheppard a friend and mentor, and the two would share a meal together whenever Beane traveled to New York for a game.

"No one loved his role with the Red Sox more than Carl did his," Lucchino said. "He adored the opportunity to pay homage each game to Sherm Feller, and to contribute to the culture of Fenway Park, a place he loved passionately."

The Red Sox were scheduled to complete a road trip on Wednesday night in Kansas City against the Royals. The team said it would pay tribute to Beane at Fenway on Thursday night before their game against the Cleveland Indians.

Beane's voice is the first one heard in "The Baseball Experience" at the National Baseball Hall of Fame in Cooperstown, N.Y.

Beane, who was diabetic, has also served as a spokesman for the American Diabetes Association and a narrator for Talking Books at the Perkins School for the Blind.

He is survived by his wife, Lorraine; his daughter, Nicole; and his granddaughters, Maddie and Gena.