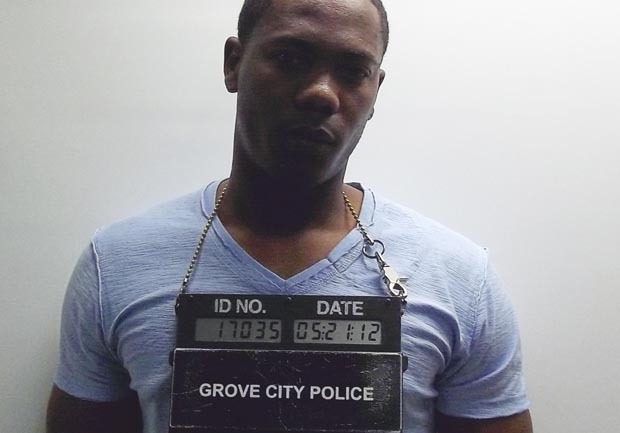 (CBS/AP) Reds pitcher Aroldis Chapman has found himself in legal trouble - in Ohio and his native Cuba.

The hard-throwing Cuban pitcher was arrested for speeding and driving with a suspended license early Monday, a few hours after it appeared he was in line to become Cincinnati's next closer.

General manager Walt Jocketty and manager Dusty Baker met with Chapman following a 4-1 win over Atlanta on Monday night to get details of the pitcher's arrest, which they didn't know about before the game.

Police in the Columbus suburb of Grove City emailed The Associated Press a copy of an arrest report showing the 24-year-old reliever was stopped after radar clocked him going 93 mph on northbound Interstate 71 shortly before 1 a.m. on Monday.

Meanwhile, Chapman is being sued for $18 million by a Cuban-American man imprisoned on the communist island.

The lawsuit, filed recently in Miami, claims that Chapman falsely accused Danilo Curbelo Garcia of involvement in human trafficking, leading to his 2008 arrest and conviction in Cuba. Curbelo Garcia is serving a 10-year sentence.

Chapman defected in 2009 in the Netherlands and was later signed by the Reds. The lawsuit claims Chapman accused Curbelo Garcia to win favor with the Cuban government so he could rejoin the national baseball team. Chapman had been suspended for a previous attempt to defect.

The Reds signed Chapman to a six-year, $30.25 million deal in 2010, expecting him to develop into a dominant starter. With the rotation set and the team on its way to the NL Central title that year, they moved him into the bullpen for the first time.

He did so well that they kept him there for 2011 in a setup role, but he struggled with his control and developed a sore pitching shoulder. He finished 4-1 with a 3.60 ERA in 54 appearances that season.

Cincinnati planned to move him back into a starting spot during spring training until injuries decimated the back end of the bullpen. Madson had reconstructive elbow surgery, and setup men Bill Bray and Nick Masset got hurt.

So Chapman went back into a setup role and has dazzled, giving up only seven hits and one unearned run in 22 1-3 innings while striking out 39. He has been so dominant that Baker decided he might be ready to try closing games.

"He graduated to the setup role," Baker said. "Now, hopefully, he's graduated — which we think he might have — to the closer's role. It just depends on how often you can use him."