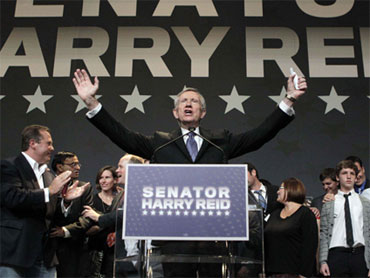 Nevada Sen. Harry Reid, who clung to his seat in Congress in Tuesday's election and will return to Washington as the Senate Majority Leader according to CBS News poll projections, told "The Early Show" Wednesday he has always played the role of "consensus builder," and looks forward to continuing that work.

Harry Reid on Hard Fought Win
Harry Reid Wins: How He Did It

And he'll have his work cut out for him. Republicans have taken control of the House of Representatives, and the presumed Majority leader in the House has already vowed to fight for a repeal of President Obama's hallmark health reform law.

Reid told "The Early Show" co-anchor Harry Smith bluntly that it was not a mistake to pass the law.

"The insurance industry was breaking America. We had no choice," he told Smith, claiming the law would save the American public $1.3 trillion dollars over the coming years.

Though the Democrats held their control of the Senate, Reid will have to rely more on his skills as a negotiator to fend off challenges emerging from the Republican House and his own, more evenly-divided chamber.

"We don't need to be lectured on how to balance the budget, how to create jobs," Reid said on the economy.

When Smith pointed out the seemingly rising sentiments of the Tea Party, and suggested that the socially conservative, anti-spending movement seemed to be "the ones who are pulling the wagon," Reid shot the notion down.

What's Next for the Tea Party?

"They're not pulling it in Nevada," he said, boasting his own nail-biting victory over Tea Party darling Sharon Angle.

"I'm going to Washington again. We're going to finish this lame duck and then we're going to start a new Congress and work together to move this country along."

"I'm a consensus builder, that's what my reputation is, I'm going to continue to do that," he said, suggesting compromise was an art cherished more dearly in the Senate than the House - by design.

"The founding fathers set up two different programs. Our program is you've got to work together. We have rules that require that. I know Mitch McConnell, we've worked together for many, many years. I've worked with John Boehner. He and I are friends. And I see no reason in the world that we should not work together," he said of the new Republican leadership.

"This doesn't mean we have to capitulate on any of our strong beliefs, but legislation is the art of compromise, consensus building."