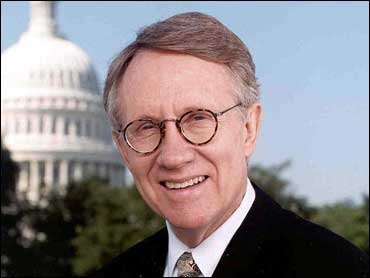 Senate Democratic leader Harry Reid said Saturday that the fight over President Bush's judicial nominees is really a battle between Democrats who believe in checks and balances and Republicans who want everything their way.

Reid also targeted House Majority Leader Tom DeLay in his remarks. While not identifying him by name, Reid said there was a "Republican leader threatening judges who protect our rights and corrupting our government by running roughshod over the ethics committee to protect himself."

The GOP has threatened to change the Senate rules to ban filibusters of judicial nominees, which Democrats have used to block 10 Bush nominees.

"When it comes down to it, stripping away these important checks and balances is about the arrogance of those in power who want to rewrite the rules so that they can get their way," Reid, D-Nev., said in his party's weekly radio address.

The Republican plan has been dubbed the "nuclear option" because some say it would blow up Senate relations. Some supporters call it the "constitutional option" because they say forcing confirmation votes will return the Senate to its constitutional responsibility to advise and consent on judicial nominees.

Reid has threatened to retaliate by slowing down or stopping Senate business through procedural maneuvers.

While the fight is technically over the internal rules of the Senate, Reid said it is still important. "This isn't about some arcane procedures of the Senate. It is about protecting liberty and our limited government," he said.

Without the judicial filibuster, "the U.S. Senate becomes merely a rubber stamp for the president," Reid said. "It would mean that one political party — be it Republicans today or Democrats tomorrow — gets to have all the say over our nation's highest courts."

DeLay, R-Texas, suggested an impeachment case could made against judges who rebuffed Congress' will in the Terri Schiavo case. Congress ordered the federal courts to review the decisions of state judges who turned down her parents' efforts to keep her alive, but federal judges all the way up to the Supreme Court held up those decisions. "The time will come for the men responsible for this to answer for their behavior," DeLay said when Schiavo died.

The House ethics committee admonished DeLay three times last year, and new questions have been raised in recent weeks about his overseas travel.

With his blessing, Republican leaders have remade the House ethics rules and the committee that reprimanded him, inserting allies and policies more favorable to his circumstances.

"Our children know that you can't change the rules just to get your way," Reid said. "I think it's time that Washington Republicans remembered those truths."