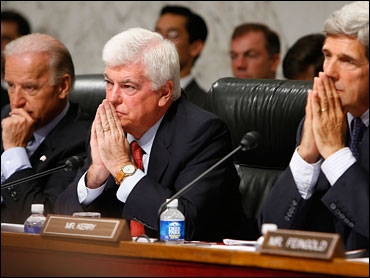 Senate Democratic leaders on Wednesday rejected the call by the top U.S. general in Iraq for a reduction of up to 30,000 U.S. troops in Iraq by next summer, saying it does not go far enough.

Reid said the recommendation by Gen. David Petraeus, expected to be embraced on Thursday by President Bush in a speech to the nation, "is neither a drawdown nor a change in mission that we need. His plan is just more of the same."

But that government remains dysfunctional and "the president is just going to stay the course indefinitely," Levin said. He said that even Petraeus, in two days of congressional testimony, had acknowledged that the purpose of the military buildup, which the administration has called a "surge," had not been accomplished.

Reid said that Democrats would offer amendments "to change the course of the war" when the Senate takes up a defense bill next week. He said they were reaching out to Republicans for help -- especially those Republicans who had been calling for a change in September.

Mr. Bush held out the promise for such a change, but it is not materializing, Reid said.

Reid wasn't specific about what amendments Democrats would offer, or whether they had the 60 votes needed to overcome GOP stalling efforts and to prevail.

"Al Qaeda is resurgent. We know the Middle East is destabilized and Iraq remains in a state of civil war," said Reid. "It appears the president has dug in, unwilling to recognize his strategy is putting all the burden on our military. And it's simply not working."

Earlier, Secretary of State Condoleezza Rice said that stabilizing Iraq would be a lengthy process that won't end when violence in that country -- and U.S. troop strength -- is reduced.

Mr. Bush was expected to announce that he plans to reduce the American troop presence in Iraq by as many as 30,000 by next summer from the 160,000 there now. Rice said Wednesday the U.S. views the task of stabilizing Iraq as not simply improving security within its borders but "to begin to have American forces in lower numbers turn to other responsibilities."

Among those, she said, is "the territorial security of Iraq" with respect to its Mideast neighbors, especially Iran.

"Iran is a very troublesome neighbor," she said on NBC's "Today" show. "Iran is prepared to fill the vacuum" if the United States leaves Iraq.

Rice's comments followed two days of testimony from Petraeus, the top military commander in Iraq, and Ryan Crocker, the U.S. ambassador there. The testimony, though, seemed only to harden positions among lawmakers. GOP conservatives said real progress was finally being made and more time was needed, whereas Democrats said the absence of a political deal in Baghdad meant the strategy failed.

"Now they can say, 'Yes, we, too, want to bring these troops out of here but Gen. Petraeus said it would be dangerous to go faster.' I think that the president is going to be able to hold the Republican support that he has. The Democrats want to go faster, but they simply don't have the votes in my view to get that done."

In a joint press conference with Crocker on Wednesday, Petraeus said Iranians appear to be trying to create a like Hezbollah-like organization in Iraq that they could use to gain influence inside the fractured country.

Crocker said he hoped neighbor states in the region will pressure nations like Iran and Syria, which he said have been part of the problem in Iraq rather than part of the solution.

CBS News has learned that the White House has requested 15 to 20 minutes of network television time for this Thursday at 9 p.m. EDT. Mr. Bush will endorse the recommendations of his top general and top diplomat in Iraq, administration officials said. The White House plans to issue a written status report on the troop buildup on Friday, they said.

Also Friday, the president will travel to a Marine base in Quantico, Va., just outside Washington, to talk further about his Iraq policy, the White House announced. Vice President Dick Cheney will do his part, too, speaking on Iraq on Friday at appearances at the Gerald R. Ford Presidential Museum in Grand Rapids, Mich., and at MacDill Air Force Base in Florida.

While mirroring Petraeus' strategy, Mr. Bush will place more conditions on reductions than his general did, insisting that conditions on the ground must warrant cuts and that now-unforeseen events could change the plan.

For their part, Democrats have rallied against the plan. But they find themselves in a box -- lacking the votes to pass legislation ordering troops home by spring but tied to a support base that wants nothing less.