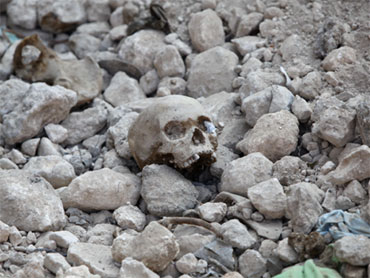 Haitian survivors on Friday marked the two-month anniversary of a devastating earthquake that leveled most of the capital, while workers continued to recover the remains of quake victims from under the rubble of several buildings.

Around 700 Haitians dressed in white marched through downtown Port-au-Prince in memory of the dead, placing floral tributes at some of the damaged buildings.

Elsewhere in the capital, teams of workers used simple tools and their bare hands to remove rubble from crumbled homes in the Bel Air neighborhood.

Meanwhile, several people were injured after a partially-destroyed building collapsed on them while they were inside it, salvaging wood.

According to a bystander, 10 people were inside the building when it collapsed, three of whom managed to escape.

U.S. soldiers and paramedics quickly surrounded the scene after the incident. Several injured men were seen lying on the street outside the collapsed building.

Aid groups say they're ready to build, but trash and sewage are piling up at the squalid tent camps of
Haitian earthquake victims while the government has failed to relocate anyone.

With torrential rains expected any day, authorities are not even close to providing the shelters they promised.

Heavy rains typically start around April 1st and there already have been deadly floods to the west of the earthquake zone.

People are jammed in crowded camps - and the mazes of rough shelters are thick with flies, mosquitoes and the stench of overflowing pit latrines.

The residents say they can't wait much longer.

Aid organizations have plans to build at least 140,000 shelters, but nowhere to build.

Government officials insist they are making progress in closed-door negotiations with private landowners.