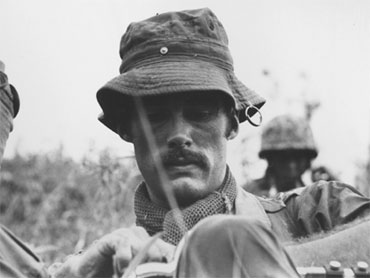 Forensic tests will be conducted on what two searchers believe are the remains of photographer Sean Flynn, son of Hollywood star Errol Flynn, who disappeared during the Cambodian War 40 years ago, the U.S. Embassy said Monday.

At least 37 journalists were killed or are listed as missing from the 1970-75 war, which pitted the U.S.-backed Lon Nol government against the North Vietnamese-supported Khmer Rouge.

A number of journalists were known to have been captured by the Khmer Rouge and probably executed.

U.S. Embassy spokesman John Johnson said that Australian David MacMillan and Briton Keith Rotheram handed over the remains Friday, and they were sent to the Hawaii-based Joint POW/MIA Accounting Command, or JPAC, which deals with accounting for missing Americans from past wars.

"Obviously there is nothing conclusive and tests need to be conducted," Johnson said. "Each case is different so it is difficult to speculate on how long the analysis may take."

The search for Sean Flynn and a close friend, Dana Stone, began not long after their disappearance in the province of Kampong Cham in 1970, notably by a colleague and Vietnam War-era photographer Tim Page.

Freelance "bone hunters" have also taken up the search for both missing journalists and U.S. servicemen listed as missing in Indochina. Some proved to be swindlers who demanded money from grieving families of the missing.

"Over the years a number of us have tried to resolve the fate of our mates. Not only have fellow media been on this quest, but officials from the U.S., Japan and France," Page wrote in an e-mail to friends last week.

Page, who urged the duo to turn over the remains to U.S. authorities, also expressed concern over how MacMillan and Rotheram allegedly conducted their search.

"It was not a forensic dig: They used an excavator and uncovered a full set of remains, which they removed from the site," Page said. He noted that nine foreigners, mostly journalists, were thought to have been held in the same area as the excavation at the time of Flynn's disappearance.

Page said the MacMillan and Rotheram excavation was carried out in March while in January, JPAC conducted an excavation in the same province in search of a U.S. pilot who was shot down and then killed, according to Um Sam An, a senior provincial police official.

Flynn, an actor who turned to photojournalism, covered the wars in Vietnam and Cambodia before his capture at the age of 28. Several documentary films and books, including "Two of the Missing," have appeared about Flynn and colleagues who suffered the same fate.

His Australian-born father was a leading star in romantic and swashbuckling films of the 1930s.