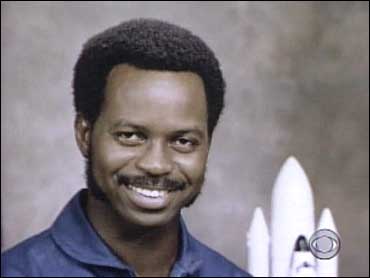 On Jan. 28, 1986, the space shuttle Challenger exploded, a horrifying moment imprinted in the minds of the millions of Americans who saw it on TV.

His brother, Ron, was one of the Challenger Seven. His second trip into space was his last.

"Immediately I knew something terribly had gone wrong,"

McNair told Strassmann
. "My dad was staying with us. And I had never seen my dad cry in my life. And that day he cried. We all cried."

Ron McNair had always had big dreams. From a small town in segregated South Carolina, McNair received his Ph.D. from M.I.T., then convinced NASA that he deserved a place in the space program.

Today, there are two dozen schools in America named after Ron McNair. But 20 years after Challenger, it gets harder for Carl McNair to make his brother seem more real than another name on a building.

So he makes it his mission to teach young Americans about the person he knew.

Strassmann was there when McNair met with a group of middle-schoolers in Atlanta whose school is named after Ron McNair.

The students have been taught to admire the astronaut, who gave up his life for the exploration of space.

"He broke through for most African-Americans, getting a Ph.D., the highest degree," said Zahra Betha, an eighth grader.

When Carl McNair describes his brother's legacy, he hopes it will be a lesson to all.