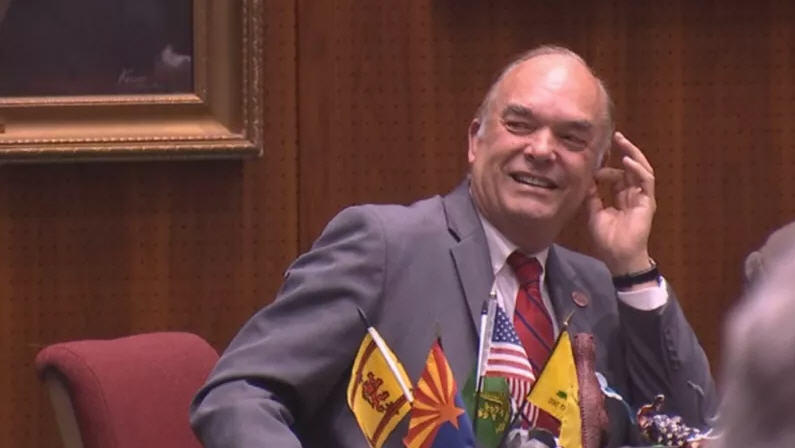 PHOENIX -- Republican state Rep. Don Shooter was voted out of the Arizona House Thursday following a report ordered by legislative leaders of his own party that showed he engaged in a pattern of sexual harassment toward women. He's believed to be the first lawmaker facing expulsion from a state legislature since the #MeToo movement took shape.

Other state lawmakers nationwide have resigned or been stripped of their leadership posts after being accused of misconduct.

The fallout comes months after Republican Rep. Michelle Ugenti-Rita said Shooter propositioned her for sex and repeatedly commented on her breasts. Many other women, including the then-publisher of Arizona's largest newspaper, came forward to say that he subjected them inappropriate sexual comments or actions.

Expulsion required the support of 40 of the chamber's 60 members. The final vote to expel Shooter was 56 to 3, with one member not voting.

Shooter told The Associated Press that he deserves to be punished but did nothing to justify expulsion.

"I've had two, three months to think about this. I did wrong, I deserve a censure," he said. "But I'll tell you this. I was sent here by the people of District 13. And to the best of my knowledge, I've never betrayed that trust, never, never. Not for monkey business, not for contributions, not for influence, not for power, not for anything. And by God, they're the ones who should throw me out if they want to throw me out. And they may."

Shooter had been facing censure, but Republican House Speaker J.D. Mesnard moved for a vote to expel him after the embattled lawmaker sent a letter to fellow representatives Thursday. It alleged the investigative report that Mesnard commissioned whitewashed accusations against another House member that were far worse than what Shooter is accused of doing.

"Rep. Shooter's letter represents a clear act of retaliation and intimidation, and yet another violation of the House's harassment policy, so I will be moving to expel him from the House of Representatives immediately," Mesnard said in slamming the letter.

You can read Shooter's letter in its entirety below:

Ugenti-Rita initially complained about Shooter's behavior in mid-October. In the following weeks, the then-publisher of the Arizona Republic newspaper and a number of other women also complained about inappropriate behavior and comments by Shooter.

Former publisher Mi-Ai Parrish wrote in a column that Shooter told her last year during a meeting in his office that he had done everything on his "bucket list," except for "those Asian twins in Mexico." Parrish is Asian-American.

The investigation substantiated some of the allegations, but not all.

Shooter has denied sexual harassment but acknowledged that he had made "jarring, insensitive and demeaning" comments. He asked for the investigation after Ugenti-Rita said he propositioned her.

"I say stupid things and do stupid things I guess," he said Thursday. "And I stood up, I apologized to those that I hurt that were legitimate. I can't change the past, but I can change the future if I'm given the opportunity."

In Shooter's letter Thursday, he said the report omitted a young woman's harassment complaint. He says she complained that another lawmaker subjected her to unwanted sexual advances.

Shooter would not say who that lawmaker was. His letter says he wants the report to include those allegations.

Mesnard slammed Shooter's letter, saying it was an effort to "use the individual as a pawn" and doesn't reflect the woman's thoughts on the investigation.

As to the young woman whose complaints he contends were ignored, he said he's upset for her.

"I'm a big boy, I'm in the ring, you take your licks," Shooter said. "But that little girl, if she gets hurt because she did the right thing, and so far she got kicked right in the teeth for doing the right thing, it ain't right."