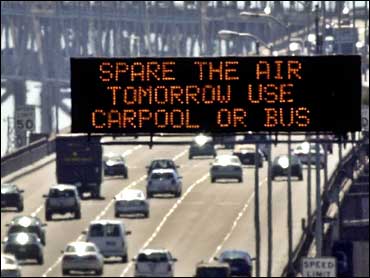 (AP)
A Republican member of Congress is calling on Treasury Secretary Tim Geithner to reveal his department's private calculations of how much a cap and trade program will raise energy prices for Americans.

In response to a Freedom of Information Act request, the Treasury Department recently released a redacted document that says cap and trade "will raise energy prices and impose annual costs on the order of XXXXXXXXXXXXXXX." A second document, also redacted, says the proposal "will involve significant costs and potential revenues XXXXXXXXXXXXXXX." A third says that the cost will be one percent of the nation's GDP per year.

Rep. Fred Upton, A Michigan Republican, wrote a letter (PDF) to Geithner on Thursday saying: "I am writing to respectfully request that you make fully available recently released documents regarding the administration's cap and trade initiative. The five documents were released this week in response to a FOIA request, and I was confounded to see that every reference, with one exception, to government revenue and costs was deliberately censored. It appears that the Treasury Department is seeking to suppress the real costs to the American public."

I sent e-mail to Treasury spokesman Natalie Wyeth yesterday asking the same thing, saying: "Can you tell me the contents of the redacted portion of the sentence? Also, can you send over the dates that the relevant documents were created? Finally, can you send the full documents rather than the brief excerpts?"

Over 24 hours later, I still haven't had a response. (All Treasury would say is that the "revenue raised from emission permits would be returned to consumers under both administration and legislative proposals.")

By way of background, cap and trade is the idea of pollution credits, meaning that a pollution limit is established and industries can sell the right to emit carbon to each other. One Treasury memo says the total in new government revenue would be between $100 billion to $200 billion a year, meaning up to $1,761 a year per household (less whatever benefits or rebates, if any, end up being approved).

It's true that the Obama administration's proposal evaluated by Treasury is not identical to what the House of Representatives has approved. One difference is that the House bill gives away most of the allowances at the beginning -- although the requirement to purchase them would still exist. As the Congressional Budget Office said last year, "firms would not ultimately bear most of the costs of the allowances but instead would pass them along to their customers in the form of higher prices" and those price increases "would occur regardless of whether the government sold emission allowances or gave them away."

How much prices will increase is hotly debated, with liberal groups like the Center for American Progress taking pains to downplay them. The conservative Heritage Foundation, on the other hand, has published a detailed analysis saying that by 2035, gasoline prices will rise 58 percent above how much they would have risen without cap and trade. Electricity prices will rise 90 percent above the baseline, and 2.5 million jobs will be lost, the analysis concludes.

This is where it would be useful to review the Obama administration's internal cost-to-consumers estimates that were redacted from the documents obtained under FOIA by the Competitive Enterprise Institute, a non-partisan think tank in Washington, D.C. that advocates free-market positions and has been critical of cap and trade.

Rep. Upton's letter says: "The censorship of these documents does not correlate with the administration's efforts for greater transparency, and raises many serious questions regarding one of the administration's leading initiatives that stands to eliminate millions of jobs and affect every single American citizen at a time when the national unemployment rate hovers just below ten percent."

During his first days in office, President Obama signed a FOIA directive to federal agencies saying: "The government should not keep information confidential merely because public officials might be embarrassed by disclosure, because errors and failures might be revealed, or because of speculative or abstract fears. Nondisclosure should never be based on an effort to protect the personal interests of government officials at the expense of those they are supposed to serve."

That might have been a politically useful policy for the White House at the beginning, when the FOIA requests pending sought possibly-embarrassing documents from the Bush administration. Now that the situation has changed, we'll see whether the administration lives up to its promises.