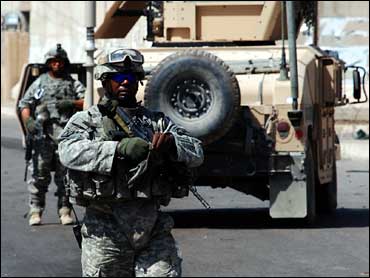 The warning came as Iraq's parliament got back to work after a month-long summer break, but it was not immediately clear whether lawmakers would quickly take up key benchmark legislation demanded by Washington.

In a statement posted on an Islamic Web site, the Islamic State of Iraq said the "War Ministry" decided to form special battalions for martyrdom seekers "to pound the bastions of the crusaders and their renegade tails" in Iraq.

"These battalions, with God's help, will perform their duties in an excellent manner during the month of Ramadan and the enemies of God will suffer a lot," the statement said. Last Ramadan, al Qaeda also urged its followers to step up attacks against U.S. and Iraqi forces.

Since the 2003 U.S.-led invasion, the month of Ramadan has seen a spike in violence - especially suicide attacks - in part because some Islamic extremists believe those who die in combat for a holy cause during the period are especially blessed.

The statement said "most of the martyr seekers of these blessed battalions will be from the Ansar (Iraqi) brothers."

The authenticity of the statement could not be verified, but it was published by an Islamic Web forum that usually carries announcements by militant groups.

Al Qaeda in Iraq is blamed for some of the deadliest suicide bombings against Shiite Muslim civilians, as well as numerous attacks on U.S. troops and Iraqi soldiers and police.

The announcement is believed to be aimed at countering what the statement described as "media reports that the mujahideen have been weakened and their attacks were curtailed."

Sunni tribal leaders in some major towns, angry over the movement's attempt to monopolize power and mandate a strict Islamic lifestyle, have turned against al Qaeda and, with U.S. support, have defeated the militants forcing them out of their areas.

Local Sunnis taking up arms against al Qaeda, particularly in Anbar Province, has been cited by President Bush as evidence of military success in Iraq.

Mr. Bush told CBS Evening News anchor Katie Couric Monday during a surprise visit to Iraq that if such success continues, it may be possible to start reducing U.S. troop levels. (Read more)

"If he's talking about bringing down troops to the pre-surge level, to 130,000, that's not withdrawal. The withdrawal would be getting us out of the middle of that civil war," said Biden, who chairs the Senate Foreign Relations Committee.