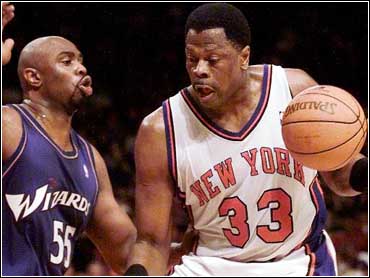 Aging veteran center Patrick Ewing might finish his career with a team other than the New York Knicks, according to a report in Saturday's New York Daily News.

The report says the Knicks are shopping the 38-year-old to a list of eight teams, provided by Ewing himself, which includes the Seattle SuperSonics and the Washington Wizards. Ewing has spent his entire 15-year career with the Knicks and has a no-trade clause in his contract.

The Knicks and Sonics have reportedly been discussing a deal that would send Ewing west for 28-year-old power forward Vin Baker.

Ewing, who averaged 15 points and 9.7 rebounds last season, is on the last year of his contract with the Knicks and is scheduled to make $14 million.