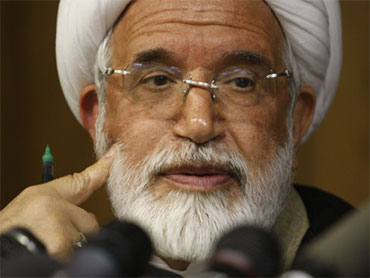 Armed pro-government demonstrators opened fire on the car of an Iranian opposition leader shattering its windows, his Web site reported on Friday.

The report added that some 500 people had been demonstrating outside the building where he was staying since the day before.

The site described the demonstrators as armed and said police were unable to disperse them.

The shooting represents a rare armed attack on an opposition figure. In 1999, pro-reform politician Saeed Hajjarian was shot in the face, paralyzing him.

The attack is an indication of the political turmoil rocking the country and possibly slipping out of control of the government.

Karroubi's car was earlier attacked by a mob wielding bricks in late December, just days after a harsh crackdown on opposition protests.

At least eight people died in clashes between security forces and opposition supporters last month in the worst bloodshed since the unrest following the disputed June re-election of President Mahmoud Ahmadinejad.

Since then death threats against opposition leaders have been on the rise. In a pro-government demonstration in late December protesters called for Karroubi's execution and that of fellow opposition leader, Mir Hossein Mousavi.

On Friday, the senior cleric Kazem Sedighi leading Friday prayers in the capital appeared to be giving a green light for people to take matters into their own hands against the opposition figures, if authorities didn't act.

"I am concerned that people will lose patience if the legal apparatus does not conduct its affairs in a timely manner," he said, while admonishing that acts of extremism would be against the wishes of the supreme leader.

Sedighi also claimed that some of the 500 protesters arrested around the Shiite holy day of Ashoura Dec. 27 were intoxicated.

Opposition members have on several occasions since the June election poured into the streets to protest the results. The opposition says more than 80 protesters have been killed in the postelection crackdown, but the government puts the number of confirmed dead at less than 40.