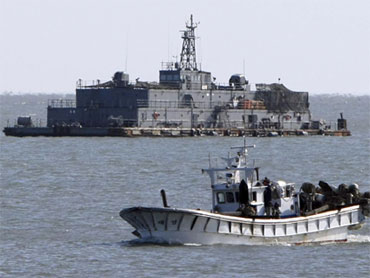 The incident apparently took place near a disputed sea border.

YTN television network cited a military official as saying that the North designated the no-sail zones possibly to conduct missile tests or other military action.

South Korea was trying to find out why the North made the no-sail zone announcement. Pyongyang did the same in the past before carrying out missile tests and military maneuvers, the Defense Ministry official said. The North has also issued no-sail zones if bad weather was expected.

One of the zones is where navy ships from the two Koreas fought a brief yet bloody gunbattle in November that left one North Korean sailor dead and three others wounded, according to Yonhap news agency. The Defense Ministry said it couldn't confirm the report.

The disputed sea border — drawn by the U.N. Command at the end of the Korean War — is a constant source of military tension between the Koreas, with Pyongyang insisting the line should be redrawn further south. The dispute also led to bloody naval skirmishes in 1999 and 2002.

North Korea has sent mixed signals to the South recently. Pyongyang offered talks on restarting stalled joint-tour programs and a joint industrial complex in the North earlier this month.

But communist country has also escalated its rhetoric with the powerful National Defense Commission threatening to attack the South and break off all dialogue over a reported South Korea contingency plan to handle turmoil in the North.

The two Koreas are still technically at war because their 1950-53 Korean War ended with an armistice, not a peace treaty.