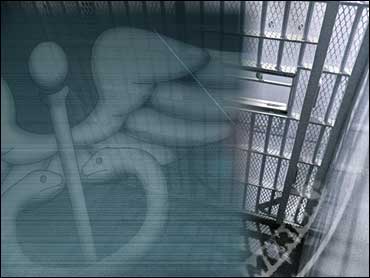 Treatment errors and other breakdowns in medical care have contributed to the deaths of at least 14 inmates since 1999 in the nation's largest county jail system, a newspaper reported Sunday.

The jail system lacks enough doctors, nurses and other medical workers, resulting in long delays in treatment for conditions ranging from hernias to heart disease, an investigation by the Los Angeles Times found.

Inmates have waited weeks for exams they were supposed to receive within 24 hours of making a request, the newspaper said.

Officials acknowledge that 20 percent of inmates who ask to see a doctor are released from jail without ever being examined, according to the Times.

"I basically saw grown men crying because they were in such pain," Kent said.

Sheriff's Lt. Stephen Smith, who oversees the jail system's medical services bureau, said treating prisoners is difficult because some conceal a medical condition while others feign illness or are mentally ill.

"We face unique challenges, and we do the best we can," Smith said. "These are difficult, angry, messed-up people. We try to treat people with the respect, not that they necessarily deserve, but that human decency demands."

A large problem is understaffing.

In a confidential 2004 report, a consultant said an additional 720 jail medical workers were needed to meet minimum state treatment standards. At the time, the work force stood at about 980.

"The county incurs significant liability for continuing a system of care that clearly is not working," the consultant said in the report to the Los Angeles County Board of Supervisors.

Spurred by those findings, officials began to bolster the ranks of doctors and nurses, but several hundred medical workers are still lacking.

An average of 200,000 people enter the county jails each year. On most nights, the population hovers around 18,000, with more than a third requiring medical care.

The county sheriff's department, which runs the jails, is required by law to provide basic medical care to all inmates.

When inmates are booked, they are questioned to determine if they are physically or mentally ill. About half require additional screening or treatment before being assigned to a cell.

If inmates later develop medical problems, there are daily "sick calls" in which they can sign up to see a nurse.

The volume of inmates, coupled with a shortage of doctors and nurses, has resulted in a backlog of hundreds of inmates waiting to be examined.

"I could have every doctor in the county of Los Angeles here, and it still wouldn't be enough," said Sander Peck, chief physician in the jail system. "I don't know what 'enough' would be."