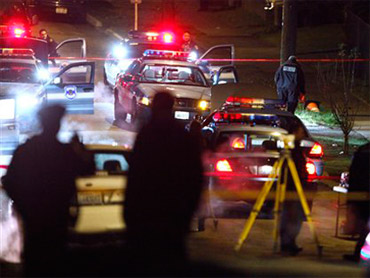 Legendary record producer Phil Spector, charged with murder in the shooting death of an actress at his hilltop mansion, told his chauffeur that night that he thought he had "killed somebody," according to a police report.

Popular music's one-time whiz kid, whose Wall of Sound brought a symphonic feeling to rock 'n' roll, was charged Thursday with murder in the death of actress Lana Clarkson.

According to police records obtained by the Los Angeles Times, he talked to his chauffeur that night, telling him, "I think I killed somebody."

The chauffeur, identified only as Souza, told authorities he came to the mansion's back door after hearing a boom and saw Clarkson, her face bloody, seated in a chair.

Spector, 63, declined to speak with reporters when he arrived at court. He acknowledged the charges and waived his right to a speedy trial, and was ordered to return to court Jan. 23 for a preliminary hearing.

He entered the court to a crush of cameras and reporters, and was wearing black clothes, dark glasses and platform shoes, reports Chris McWatt of KCBS-TV.

The studio producer, who has worked with the Beatles, the Ronettes, Righteous Brothers and many others, is charged with killing Clarkson, 40, on Feb. 3. He suggested earlier this year in an interview with Esquire magazine that Clarkson, who also worked as a hostess at the House of Blues, may have shot herself.

"We have assembled a team of scientific experts which is among the most respected and prestigious in the world," Shapiro said. "Based on this team's findings of this horrible human event, any jury will conclude that Phil Spector is not guilty."

District attorney spokeswoman Sandi Gibbons said either charge carries a possible maximum penalty of life in prison with a possibility of parole.

Spector, who has been free on $1 million bail, was also charged with personally using a handgun in commission of a crime, an enhancement that could add more time to a sentence if he is convicted.

According to the Times, the police report says that when police arrived, Spector refused to raise his hands and was shot with a Taser, a high-voltage stun gun. Officers then knocked him to the ground and handcuffed him.

Spector became legendary in the music business for transforming the sound of rock 'n' roll with heavy orchestration. He once said he was creating symphonies for teenagers. He produced such pop music classics as "Da Doo Ron Ron," "Then He Kissed Me" and "To Know Him Is to Love Him."

Ironically, the charges come the same week as a new version of The Beatles' "Let It Be" album was released, removing all of Spector's work.

Clarkson was discovered by B-movie king Roger Corman and starred in a series of films including "Barbarian Queen," a character Corman said was the model for TV's "Xena: Warrior Princess." She appeared in TV commercials and was a guest at comic book and pop culture conventions dressed as her queen character. Corman said she was known for her athletic ability and did all her own stunts.