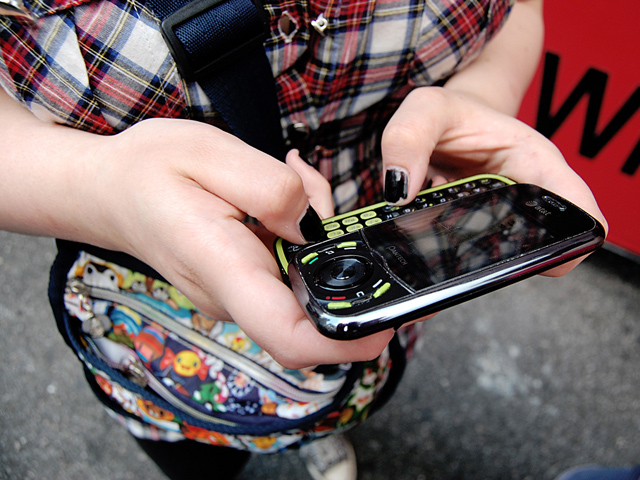 Gone are the days of just reminding kids to look both ways before crossing the street. Thanks to modern technology, the non-profit Safe Kids Worldwide says they now also need to be reminded to look up -- that is, away from the screens of electronic devices.

It's a reminder that could save their lives this back-to-school season, according to the child safety advocacy group.

"People think that they're safe in a cross walk," Kate Carr, president and CEO of Safe Kids Worldwide, told CBSNews.com. "They think it's not going to happen to me. And in fact, we're seeing more pedestrian injuries and fatalities."

Pedestrian injury rates have increased by 25 percent over the past five years among teens ages 16 to 19, according to Safe Kids, with that age group now representing about half of all pedestrian deaths for children and adolescents.

A May report from the government's National Highway Traffic Safety Administration found about 69,000 pedestrians are hurt each year, 11,000 of whom are younger than 14 years old. About 4,400 of the injuries were fatal, according to 2011 agency statistics.

Safe Kids wanted to measure the risk for this age group in areas where kids walk the most: to and from schools. Researchers camped out in intersections at 68 schools in 17 states, where they observed more than 34,000 kids crossing the street.

They found about one in five high schoolers were distracted by an electronic device when crossing. So too were about one in eight middle school students.

"That's a cross-walk observation, a space where (teens are) least-likely to be distracted," said Carr. "But so many are texting, have headphones on, and talking on the cell."

Researchers also surveyed about 2,400 of the kids on their pedestrian habits, and found half used a cell phone when walking to school, 40 percent listened to music while walking, and about 6 percent were using gaming devices.

Despite teens being most at risk for pedestrian crashes, nearly 80 percent of those surveyed said kids in a different age group were at greater risk.

That's why Safe Kids wants teens to take part in a "Moment of Silence" when crossing the street. The organization's campaign was launched in memory of Christina Morris-Ward, a 15-year-old Md. teen who was wearing headphones and carrying her phone while crossing the street two blocks from her high school last year on the morning of Halloween.

"Technology is great, but technology doesn't always fit into the activity," said Carr. "Let's just be mindful of where it belongs."

Earlier reports have suggested distracted walking due to electronic devices is a growing U.S. problem.

Last Dec., Seattle researchers observed 20 busy intersections, and found distracted behaviors in about 30 percent of pedestrians. More than half of those observed were between 25 to 44 years old, and most observations took place during morning rush hour.

Fort Lee, N.J. banned "dangerous walking" -- which can include texting while walking -- last year after 23 pedestrians were injured during a four-month stretch in 2012, including three fatalities.

The U.S. Department of Transportation recently announced a $2 million grant program for 22 cities where pedestrian fatality rates are higher than the national average. Money would go towards education and enforcement of laws that discourage distracted walking.

"Everyone in America is a pedestrian," Transportation Secretary Anthony Foxx said this month. "Every pedestrian death is one too many."

With so much recent attention being placed onteens texting while driving, Safe Kids doesn't want parents and students to forget they should be just as alert while walking.

Warned Carr, "Those few seconds are worth much more in terms of your life than the message you're in the midst of."