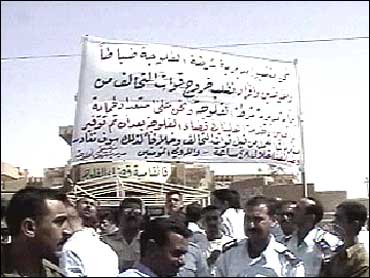 U.S. soldiers withdrew Friday from a police station in the tense western Iraqi town of Fallujah after Iraqi officers complained that the American presence put them at risk, the head of the town's police force told The Associated Press.

Col. Jalal Sabri said the Americans left the station Friday morning. The U.S. military would not confirm his account.

In new violence, the military says insurgents fired two mortar rounds into the U.S. base in the troubled western city of Ramadi. No injuries are reported. It was the seventh attack on the base in the last 10 days.

One Iraqi was shot in the neck and another in the abdomen when troops opened fire after a grenade attack on a military convoy on a road leading to the Baghdad airport.

Also, a young Iraqi girl suffered shrapnel wounds during a firefight between U.S. forces and suspected militants near a city about 55 miles north of Baghdad.