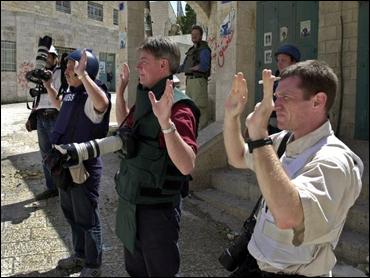 Nothing focuses the mind quite like sitting cross-legged in a sandy pit, with a hood over your head, gunfire going off all around, and with no idea if you're alone or if your colleagues have been taken there too, after a noisy ambush in the woods.

This was the highpoint of a week of Hostile Environments training. And it was very realistic. We had to judge these fake rebels, who became convinced we were spies, and their intentions, and do what we could to survive.

Playing war games in the English countryside, in teeming rain, might not seem everyone's idea of a good time. But, so far this year, 22 journalists have lost their lives on the job and we are increasingly regarded as legitimate targets, harassed and even attacked by the authorities and kidnapped by rebels or criminals, so it certainly seemed like a good idea.

And what better place than a British army training camp? I was there with a mixed group from CBS and the BBC, from veterans with decades of war reporting under their belt to novices who've never been anywhere.

Former SAS (paratroopers) and British Army intelligence officers put us through our paces in an array of situations, including dealing with police checkpoints, driving in convoy and making a hotel room as safe as possible. We picked our way gingerly through a mock minefield — though, having seen real minefields in Kosovo, I prefer to follow the advice of a more experienced colleague and, wherever possible, stick to the asphalt.

An excellent first aid course taught us the basics and the tough stuff, like how to patch up bullet wounds and fractures without a medical kit, using whatever clothes or equipment we might have at hand.

Personal safety is always a concern for journalists in potentially dangerous situations. There was a lot of emphasis on the benefits of traveling with others rather than going it alone and on the importance of good communications between colleagues. At a fake frontier crossing, one group was horrified to find they'd driven off, at gunpoint, unaware they'd left one person behind.

There was some discussion of danger awareness, such as how to handle money in public, what documents to always have handy, awareness of local customs and — for women especially — concerns about dress, so as not to offend or excite unwanted interest.

We also learned a few basics of weapons and their ranges: when to run and when to give in.

Not since Bosnia in the early 1990s has the world been such a dangerous place for journalists. But, in fact, the majority of journalists killed or wounded in action are caught in the kind of situation that can happen anywhere.

Last year, a Swedish cameraman was shot dead by teenage robbers who broke into the house where he was based in Afghanistan. Numerous journalists, from CBS News and other news media, have been badly hurt in road accidents. When you're in a conflict zone or even in post-conflict areas, rules and regulations have often broken down, looting is common and people drive without heed for safety.

So we learned a lot about vehicle security, from the simple things like "always wear a safety belt," to strapping down heavy equipment and checking rental cars to make sure that the people who had it before have left nothing incriminating like a gun clip or military maps that could get you into trouble further down the road.

In the end though, there is no formula. Each journalist learns to use what he or she has and learns to read the situation. Sometimes being a woman is an advantage; in a hostage situation it can be a major disadvantage. During that fake ambush, the "rebels" made it clear I would be kept until last, as a "prize."

I kept my head down as long as I could while the "rebels" were, by turn, hostile, friendly, or angrily violent with members of the group and as they gradually led the others away, one by one, to be followed by an ominous-sounding single shot. Those left behind struggled to work out which was a colleague being "killed" and which was just meant to scare us into assuming everyone was being shot.

When they started to pay attention to me I fell back on my main saving grace in a tight spot: I'm an Irish citizen, from a neutral country that's known its own conflict. So I just kept telling them about Ireland.

And, despite much dark talk of "keeping the girl" to "have fun with," I was one of the last two, with a CBS News cameraman, and we walked out of there "alive" — and with a much better idea of how we might react if we found ourselves in real trouble.