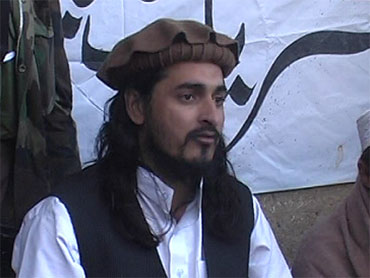 The Pakistani army said Sunday that it was investigating reports that Pakistani Taliban leader Hakimullah Mehsud died from injuries sustained in a U.S. drone missile strike in mid-January.

The militant leader's death would be an important success for both Pakistan, which has been battling the Pakistani Taliban, and the U.S., which blames Mehsud for a recent deadly bombing against the CIA in Afghanistan.

The army's announcement came shortly after Pakistani state television, citing unnamed "official sources," reported that Mehsud died in Orakzai, an area in Pakistan's northwest tribal region where he was reportedly being treated for his injuries.

"We have these reports coming to us," army spokesman Gen. Athar Abbas told The Associated Press. "We are investigating whether it is true or wrong."

A tribal elder told the AP that he attended Mehsud's funeral in the Mamuzai area of Orakzai on Thursday. He said Mehsud was buried in Mamuzai graveyard after he died at his in-laws' home. The elder spoke on condition of anonymity for fear of retribution from the Taliban.

Pakistani intelligence officials have said that Mehsud was targeted in a U.S. drone strike in South Waziristan on Jan. 14, triggering rumors that he had been injured or killed. The strike targeted a meeting of militant commanders in the Shaktoi area of South Waziristan.

Mehsud issued two audio tapes after the strike denying the rumors. But Pakistani intelligence officials told the AP on Sunday that they have confirmation that the Taliban chief's legs and abdomen were wounded in the strike.

The officials spoke on condition of anonymity because they were not authorized to talk to the media.

Pakistani Taliban officials were not immediately available for comment, but low-level fighters have dismissed rumors of Mehsud's death in recent days as propaganda.

The drone strike that targeted Mehsud came about two weeks after a deadly suicide bombing he helped orchestrate killed seven CIA employees at a remote base across the border in Afghanistan. Mehsud appeared in a video issued after the bombing sitting beside the Jordanian man who carried out the attack.

The U.S. refuses to talk about the covert CIA-run drone program in Pakistan but officials have said privately that the strikes have killed several senior Taliban and al Qaeda leaders.

Pakistani officials publicly protest the strikes as violations of the country's sovereignty, but U.S. officials say privately they support the program, especially when it targets militants like Mehsud who the government believes is a threat to the state.

Mehsud, who has the reputation as a particularly ruthless militant, took over leadership of the Pakistani Taliban soon after Baitullah Mehsud's death.

The 28 year-old militant leader has focused most of his attacks against targets inside Pakistan, but his men have also been blamed for attacking U.S. and NATO supply convoys traveling through the country en route to Afghanistan.

Hakimullah Mehsud first appeared in public to journalists in November 2008, when he offered to take reporters in Orakzai on a ride in a U.S. Humvee taken from a supply truck headed to Afghanistan. He was the Pakistani Taliban's regional commander in the Orakzai, Khyber and Mohmand tribal areas before taking over the organization.

He has taken responsibility for a wave of brazen strikes inside Pakistan, including the bombing of the Pearl Continental hotel in the northwestern city of Peshawar last June and the attack on the Sri Lankan cricket team in Lahore earlier that year.

The group stepped up its attacks after the Pakistani army invaded its stronghold of South Waziristan in mid-October. More than 600 people have been killed in attacks throughout the country since the ground offensive was launched.

Authorities have said Mehsud has been behind threats to foreign embassies in Islamabad, and there is a 10 million rupee ($120,000) bounty on his head.
By Associated Press Writer Asif Shahzad; AP writer Hussain Afzal contributed to this report from Parachinar