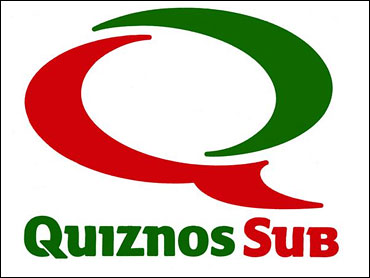 Denver-based sandwich chain Quiznos, the fastest-growing restaurant chain in the country, is on the auction block and could sell for as much as $2 billion, according to published reports.

A company spokesman did not immediately return a call Thursday.

Quiznos, known for its toasted submarine sandwiches and television commercials featuring a wise-cracking baby, is controlled by Rick Schaden and his father Dick Schaden. They owned about two-thirds of the company's stock when they announced a privatization deal in 2001.

Quiznos is the fastest-growing restaurant chain in the country and is second only to Subway in sales of sub sandwiches. After it hit the $1 billion sales mark last year, Subway introduced toasted sandwiches to its menu.

Private equity firms were expected to be the most interested bidders, the reports said.

Earlier this week, three private equity firms announced they had agreed to buy Dunkin' Donuts and two other restaurant chains for $2.43 billion.