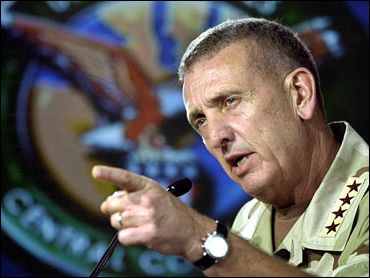 The human and financial costs of war could be hot topics as Gen. Tommy Franks, recently retired from commanding coalition forces in Iraq, briefs Congress Thursday.

The session comes a day after the general's civilian boss indicated the cost of postwar operations could be double an earlier estimate.

Franks' appearance before the House Armed Services to review the military's "lessons learned" in Iraq is expected to focus as much on the two months since the end of major combat as it does on the three weeks of intense fighting that toppled Saddam Hussein's regime.

U.S. troops have come under sporadic attack since President Bush declared an end to major combat on May 1. Since then, 74 troops have died — about 31 from hostile fire — and 382 have been wounded or injured. In total, operations in Iraq have claimed 212 American lives and wounded 1,044 U.S. troops.

Rumsfeld rejected the "widely held impression that regime loyalists are operating freely." He said large portions of Iraq are stable.

Rumsfeld also said nobody knows how long U.S. troops will be in Iraq.

"We intend to see it through and it's going to take some patience," he said. "And when it's done it's going to be darn well worth having done."

But Franks indicated that the American force on the ground in Iraq is unlikely to get any smaller. When asked how long the current force of 140,000 GIs would remain, he said, "It is for the foreseeable future."

"The numbers of U.S. forces could change, while the footprint stayed the same, in the event that we have greater success in bringing in additional coalition forces, in the event we are able to accelerate the Iraqi Army," he said, according to The New York Times.

The Army's 3rd Infantry Division is beginning a phased pullout of its 16,000 troops, with the entire unit expected back in the United States by September, Rumsfeld told the committee. The division, which played a central role in capturing Baghdad in April, is based at Fort Stewart, Georgia.

In the immediate aftermath of the toppling of Saddam's government in April, it was expected that the 3rd Infantry Division would go home by June. But the soldiers were kept longer because of a surge of anti-U.S. violence in Baghdad and elsewhere in central Iraq.

Rumsfeld said there are now 148,000 American troops in Iraq. He did not say whether the 3rd Infantry Division would be replaced by another U.S. unit, although he said he expects thousands of international soldiers to begin operating in the country by late summer or early fall.

Democrats pressed Rumsfeld about whether the administration specifically requested forces from NATO. Rumsfeld said his deputy, Paul Wolfowitz, made a formal request for postwar assistance in December

"None since the war?" asked Sen. Carl Levin of Michigan, the committee's top Democrat.
"I have no idea," Rumsfeld said, offering to find out.

Under questioning from Sen. Robert Byrd, a West Virginia Democrat, Rumsfeld said he did not know how much the administration would propose to pay for operations in Iraq and Afghanistan for the new budget year that begins Oct. 1.

He said under the $62.4 billion midyear spending bill, the United States expects to spend an average $3.9 billion a month on Iraq from January through September this year.

According to The Times, that figure compares to a $2 billion a month estimate by administration officials in April.