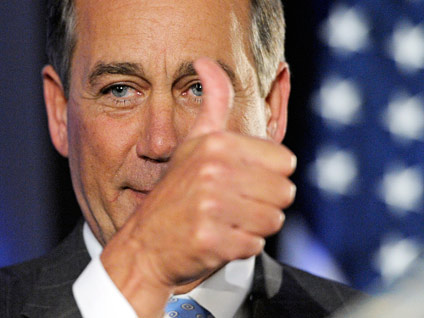 It's just the scenario President Obama hoped he could avoid. In fact, he did 19 political rallies and 69 fundraisers during the past year -- generating more than $75 million -- mostly to keep Congress in Democratic hands.

But come January, he'll have to deal with Republicans as the majority party in the House of Representatives.

It will change just about everything in political Washington for the remainder of Mr. Obama's term in office.

The political flip in the House means Republicans can plant a giant stop sign in front of what's left of the president's legislative agenda.

It means Republican-led House committees can vote themselves subpoena power to investigate adminstration actions, policies and personnel, which never happened when Democrats were in charge.

Mr. Obama was monitoring the election results in the residence, but the White House got the feeling early Tuesday evening that bad news was in the offing. The press office announced a "full lid," which signaled reporters that there would be no official comment on the election results until Wednesday morning or until Mr. Obama's previously scheduled news conference Wednesday in the East Room at 1 p.m. Eastern time.

He is certain to be asked if he accepts the GOP triumph in the House as a referendum that voters rejected his policies of the last two years.

Mr. Obama has repeatedly acknowledged he faced popular anger and frustration over the state of the economy and a national unemployment rate that topped 10 percent but has yet to fall below 9.6 percent.

And it can be said that many voters rejected his repeated warnings that a vote for Republicans would take America back to "the failed policies of the past." Again and again he said GOP policies drove the economy into a ditch and would do so again if they got their hands on the car keys of the economy.

But that was then. At his news conference on the day after, he can be expected to offer his congratulations to the GOP and also extend a hand of cooperation.

In fact, in a White House statement at nearly 1 a.m. Wednesday morning, reporters were told Mr. Obama telephoned his congratulations to House Republican Leader John Boehner. Mr. Obama also phoned Senate Republican Leader Mitch McConnell. The White House said he told the two of them that he was "looking forward to working with them and the Republicans to find common ground, move the country forward and get things done for the American people."

The White House also said the president phoned House Speaker Nancy Pelosi, who is losing her majority in the House and will have to step down as speaker in January.

It was she who helped Mr. Obama him ram through his health care and financial regulatory reform bills. No Democrat will have that power in the new House.

Earlier Tuesday evening, Boehner, the presumptive next speaker, served notice on Mr. Obama: "The American people have sent an unmistakable message to him tonight, and that message is: 'change course.'"

Boehner said he hopes the president "will now respect the will of the people" and "commit to making the changes they are demanding."

"And to the extent he is willing to do that, we are ready to work with him," said Boehner, who as speaker would be second in the line of succession to the presidency.

But pledges of cooperation don't go far when two sides are so philosophically at odds over the proper role of government. The new political configuration in Washington won't ease gridlock. In fact, it may make it worse.

But the president and Congress will have to work together on many issues, no matter how much they disagree.