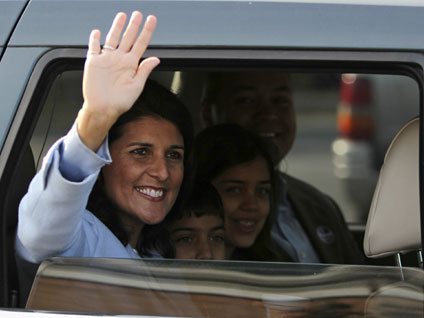 There were a record 37 gubernatorial seats up for grabs this election, but only three women managed to get elected to state executive seats, and all were Republican.

Three states sent women to their governor's mansions for the first time in their history this election cycle, despite the flashiest female gubernatorial candidate, California's Meg Whitman, running an expensive and ultimately unsuccessful campaign.

In South Carolina, Republican Nikki Haley became the first woman of Indian descent to become elected governor in America, following her male counterpart in Louisiana, Gov. Piyush "Bobby" Jindal, who was elected in 2007.

Haley survived what many described as a dirty and often divisive campaign to become the state's first female governor. Haley's full name is "Nimrata Nikki Randhawa Haley," and she was born in South Carolina to parents of Sikh Indian descent.

In New Mexico, Republican Susana Martinez became the first Hispanic female governor in the country with the help of an endorsement from former Alaska Gov. Sarah Palin. She is also the state's first female governor. A state district attorney, Martinez said on the campaign trail she wants to repeal laws that grant driver's licenses to illegal immigrants, to revamp the state's schools by investing in private education, to balance New Mexico's budget by lowering spending and to create a rainy-day fund for tax dollars.

In Oklahoma, U.S. Rep. Mary Fallin became the state's first female governor. Originally elected to Congress in 2006, she was also the first woman to represent Oklahoma in the U.S. House of Representatives since 1920.