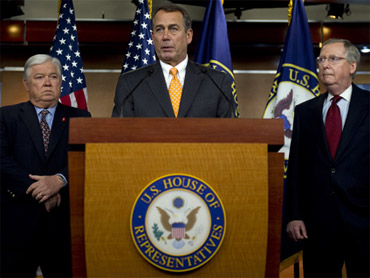 A sixth Democratic House seat in New York fell to Republicans on Tuesday when freshman incumbent Dan Maffei conceded he could not overcome a narrow lead by Ann Marie Buerkle.

"I want to thank him for doing what is in the best interests of the district," she told the Syracuse Post Standard. They agreed to work together for a "seamless transition."

Maffei trailed by 567 votes in the unofficial count of votes cast on election night and by absentee ballot. The two campaigns challenged the validity of 392 ballots, not enough to turn the race.

"I am deeply and forever grateful for the opportunity to serve you during the past two years," Maffei said in a written statement.

Maffei said he would not apologize for supporting President Barack Obama's stimulus plan and health care reform measures, votes that Buerkle used against him in campaign ads.

"I make no apologies, except to my friends, supporters, and staff for the fact the final outcome was not what we wanted," he said. "I congratulate Congresswoman-elect Buerkle and her supporters and family."

Democrats entered the election cycle with a 26-2 advantage in the state's congressional delegation, with one vacancy in the heavily Republican 29th Congressional District in the state's southern tier. Maffei becomes the sixth Democrat to fall in eight districts deemed vulnerable. One more race, on Long Island, is still undecided.