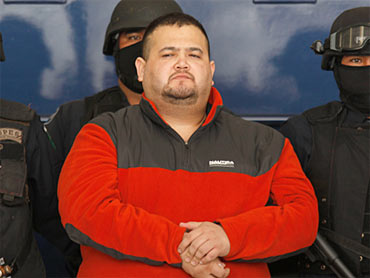 Mexico has captured a kingpin accused of terrorizing his way to the top of a gang fighting for control of key U.S. drug routes - even ordering rivals dissolved in acid. Tuesday's arrest, announced by U.S. and Mexican officials, capped a series of victories in Mexico's U.S.-backed war on narcotics.

Teodoro Garcia Simental, known as "El Teo," was arrested at 5 a.m., said Amy Roderick, a spokeswoman for the U.S. Drug Enforcement Administration in San Diego, California. She said she had no other details.

A U.S. official and a Mexican law enforcement official said he was captured in La Paz, the capital of Baja California Sur state. He is the second alleged major drug lord to be taken down in less than a month by President Felipe Calderon's government.

Neither the U.S. nor the Mexican official was authorized to give a name for publication.

Garcia is considered to be among the country's most vicious kingpins. Officials say he was to blame for many of the beheaded bodies found dumped in Tijuana and that he ordered hundreds of bodies to be dissolved in acid.

He is listed among Mexico's 24 most-wanted drug lords and the government had offered $2.1 million for information leading to his arrest.

Officials say Garcia was a cartel lieutenant who broke away from the Arellano Felix gang following the arrest of its leader, Benjamin Arellano Felix, and the death of his brother, Raul.

Garcia formed his own gang, which was zealous in killing street-corner peddlers as he tried to solidify his control of eastern Tijuana. He is believed to be allied with the Sinaloa cartel, run by Joaquin "El Chapo" Guzman, according to an army document dated February 2009.

Garcia has been fighting to control Tijuana's lucrative drug routes to the U.S. ever since 2002 -- taking the lives of more than 1,400 people, reports CBS News correspondent Bill Whitaker.

Journalist Vicente Calderon, who covers the drug wars, told Whitaker that the federal government had to send in the troops to stop the carnage.

"The response has been with the only weapon that they have and one of the weapons in this current government is the military," Calderon said.

His arrest comes on the heels of another triumph for Calderon's drug war. Mexican marines killed reputed kingpin Arturo Beltran Leyva on Dec. 16 during a raid on an apartment complex in Cuernavaca, south of Mexico City.

Federal officials on Jan. 2 arrested his brother Carlos Beltran Leyva in another blow to the gang.

Calderon's government has sent more than 45,000 troops to drug hotspots to confront the cartels. Cartels have responded with a vengeance, unleashing unprecedented killings. More than 15,500 people have died from drug violence since 2006. The government says most of the dead are smugglers.

Tijuana has been overrun by cartels who smuggle drugs into the U.S. The police chief there has declared war on the criminals and brought the civilian death rate down, but at a terrible price to his department, Whitaker reported last month.

While Tijuana police chief Julian Leyzaola was rebuilding his police department, the cartels were building too -- six drug tunnels discovered under the U.S.-Mexican border in the last year.

CBS News got an exclusive look at one of them. It's about 33 feet deep, and 166 feet long. Authorities caught and stopped the cartels just 50 feet short of the U.S. border.