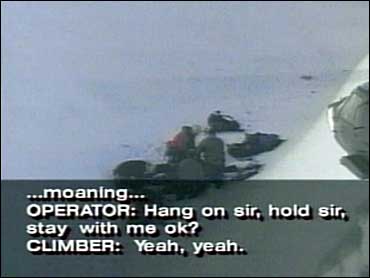 Despite dramatic calls for help on a cell phone, one of two mountain climbers who fell into a crevasse on Oregon's Mount Hood this week died of his injuries.

Eric Taylor of TV station KOIN, a CBS affiliate, reports that rescuers worked hours Thursday to reach the two climbers near the Sandy Glacier, on the west side of Mount Hood outside of Portland.

Guided by the less-injured climber, who was using a cell phone, a helicopter from the Oregon National Guard lowered rescuers onto the mountain, where they found 37-year-old Shaun Olcott, who was using the cell phone to get help, and his unresponsive companion, 37-year-old Kenny Kasselder. Kasselder reportedly had just moved to the Portland area from Alaska.

During the call, listeners could tell both were in a great deal of pain, because of the moaning in the background and some of the chilling comments made during the conversation:

Rescuer: Hold on, sir, stay with me. OK?

What was most chilling is that, as the less injured climber was explaining what happened, you could hear his companion calling out, saying, "I'm dying."

Both men were taken off the mountain. Authorities said Olcott was taken by helicopter to a Portland hospital where he was treated for a broken arm and broken ribs. Officials said he was in stable condition

Kasselder, who reportedly died on the mountain, suffered head and back injuries. He was taken to the Clackamas County Medical Examiner's office.